Back in my younger years, I harbored moderately serious fantasies about hiking the Pacific Crest Trail (now that I'm 50, that's been reduced to a tentative plan to hike the John Muir Trail, or a version of it that suits us, in a couple of years).    (Note: the PCT is 2,660 miles and runs from Mexico to Canada along the Sierra Nevada and Cascade mountains.  The JMT is 210 miles and runs from Yosemite Valley to the summit of Mt. Whitney, the highest point in the contiguous US).

Even though I do not now expect to ever through-hike the PCT (and don't actually want to--too many parts of the trail just aren't that fun), I still love reading books about it.  This month, a friend sent me two books about couples hiking the trail.  Both were winners of the Barbara Savage Miles From Nowhere Memorial Award, given to compelling narratives of personal journeys in the form of muscle-powered adventure.

First, a note about the Pacific Crest Trail, because this is important to understanding both books: The problem with walking 2660 miles in a single season is that you have to start very early.  This is fine for the desert portion of the trail--in fact, even March is getting almost too hot there.  But the Trail in the first 300 miles, alternates between desert crossings and climbing up over 10,000-foot peaks in the San Bernardino Mountains.  Weather seems to be wrong more often than not, and you're never quite in the right place at the right season.  If you are too early, the Sierra is impassable (and you have to hike it when it's only sort of passable).  If you are too late, either you die in the desert or you freeze in the North Cascades in October (and probably get snowed out and have to quit).   And even by time you reach northern California, you are hiking through some very hot and dry areas in the middle of summer.  There are places where you just have to hike 25-30 miles in a day, because there is no water.  The highest point on the trail is over 13,000' (a pass in the Sierra); the lowest is about 180 feet, where the trail crosses the Columbia River.  That's a lot to ask of any body.  If books like these talk a lot about food, there's a good reason for it. 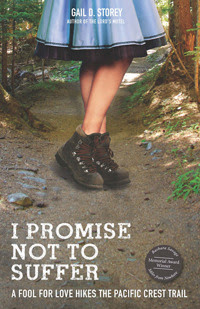 I Promise Not to Suffer: A Fool For Love Hike the Pacific Crest Trail, by Gail D. Storey.  211 pages, including appendix on gear and food.
Published 2013 by The Mountaineers Books
Source: a friend sent me her copy to read, along with A Blistered Kind of Love (see below).

Summary: Gail Storey and her husband of 19 years deal with his midlife crisis by getting outside.  He is fairly experienced (he hiked the Appalachian Trail a few years earlier); she is not.  Gail is going along, originally, primarily because she doesn't want to be left behind (as she was when he did the AT; she started that with him and quit after 40 miles).  The story is as much about their relationship and her growth as a human as it is about the trail.

Review: First off, I want to say that I found it immensely encouraging to read this book, because Gail and her husband, Porter, are in their 50s.  Not 20-somethings who have bodies willing to take a beating, but people like my husband and me--fit, but  having to be a bit cautious about the level of abuse we dish out.  And the trail does dish out hard stuff for them.  Weather, distance, elevation changes, altitude.  And Gail's body does not take kindly to this.  Instead of hardening to the trail, she loses her appetite and loses way too much weight.  But here's the thing: instead of wanting to quit, she falls in love with this painful way of living.  She is finding out that there is something she's out there to do besides be with her husband, and she's sort of sitting back and letting it happen.  The Trail chews Gail up and spits her out.  But her account of it, and of the spiritual change that takes place in her through it, is worth the reading.

Here's my favorite line, just to show that the woman also has a way with words.  She is describing a time she spent three months in a Buddhist monastery, before she was married:
"Like me, everyone in the meditation hall seemed hell-bent on finding peace." 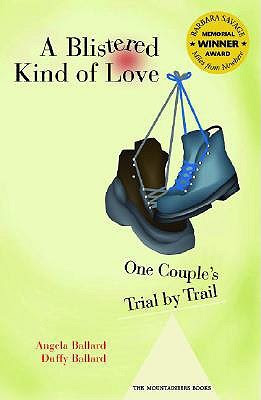 A Blistered Kind of Love: One Couple's Trial by Trail, by Angela & Duffy Ballard, 264 pages.
Published 2003 by The Mountaineers Books
Source: given to me by a friend (see above).

Summary: Angela and Duffy Ballard hiked the Pacific Crest Trail in 2000, as a pair of not-yet-engaged 20-somethings.  He was in medical school, she working, so they operated under strict time constraints (he had to be back in Philadelphia on Sept,. 20 to start school--a pretty early end date for the trail).  Neither of the pair was particularly experienced, though he at least had done some camping as a kid.  This book is about both the relationship and the trail, but perhaps more about the trail than I Promise Not to Suffer.  While the Storeys practiced a fairly extreme ultra-light approach, the Ballards  opted for heavier packs and more comfort.  It's interesting to see how the two options pan out, as each has obvious drawbacks (a scant tarp is dubious shelter when the weather truly goes wild, but a tent is a lot of weight when you have to carry a gallon or more of water and 10 days worth of food).

Review: It was fun to compare the two books, though I don't really recommend reading two such books back-to-back, especially if you have responsibilities that you might prefer to leave behind (no, I won't be running away to hike the PCT.  For one thing: winter.  But it's tempting).  I found this to be a more compelling narrative of the trail, leaving me with both a more complete sense of what it's like to hike it and a more even narrative.  This is probably because the book is written by both Angela and Duffy, in a back-and-forth style that could use some visual cues to tip the reader off, but otherwise works well.  I like that incidents--especially fights--were dissected from both sides.

Fights, you say?  Well, naturally.  Neither couple gets away without conflict; it would be unbelievable if they did.  But this pair had only been together for a year or so, and had a lot to learn about relationships and each other, at the same time as they were learning about hiking.  An impressive survival feat!  It's not surprising that they express fears and worries about things that a more experienced hiker (I've never done a long trail, but I've spent a lot of nights in the wilderness) might dismiss.  I found myself at times feeling superior ("well, gee, didn't you guys even know. .  . "), but it's part of what impressed me: that two such neophytes actually made it to Canada (even if they didn't hike absolutely every section; time constraints forced a couple of skips).

Favorite bit: the first acknowledgement in the front of the book is. .  . the peanut, without which their hike (and many others) wouldn't have been possible.

Full Disclosure: I was given  copies of I Promise Not to Suffer and A Blistered Kind of Love by a fellow hiker, and received nothing whatsoever from the author or publisher in exchange for my honest review.  The opinions expressed in this review are my own and no one else's.

*****
And if you like to hike and want to introduce the kids to it--check out my fun picture book: 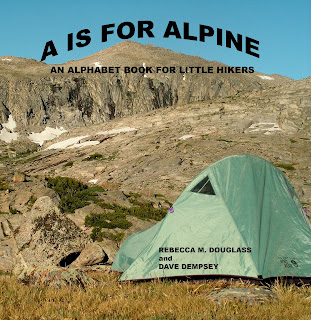