Flash Fiction Friday: In the Valley of the Baleful Stones

Chuck Wendig is not a nice man.  This week he gave us a list of random words, ten of them, and told us to use them all in a story.  All ten!  That's just mean.  I was doing pretty well with the list and my fantasy setting until I got to the last one.  You'll know when you reach it.  I'll give you the whole list at the end of the story, just for fun.  Feel free to see how many you can guess without cheating.  Then visit Chuck's blog and check out how some others used them (warning: other bloggers may not be suitable for youngsters, or work, or polite company.  I can't make any promises).  990ish words.


In the Valley of the Baleful Stones


Gorg left the Iron Desert through a narrow canyon, a tight, stony gorge just too wide to be a slot.  Nothing grew there but stones.  After days crossing the unyielding iron of the desert, the stones represented life to Gorg the Troll.  Being stone himself, mostly, he grazed happily on chunks of granite and basalt as he strode along, with an occasional conglomerate for a relish.

The midday sun beat down, turning the canyon into an oven.  Had a human chosen that route, there wouldn't even have been a corpse left for the funeral.  They'd have been cooked to nothing and picked clean by the vultures that waited on the high cliffs.  Though even the vultures might have waited for night to cool things down a bit.  The troll just kept moving, even humming a little--a sound like a cross between a rockfall and an elephant in distress.

The canyon broadened and straightened just a bit.  In the distance Gorg could now see a lone willow--sure sign of water.  He didn't need water; trolls didn't drink except for fun.  But it told him he was nearing the end of his journey, and he picked up the pace.  He had a date to keep with Duke Bale the Artichoke-Hearted, and he didn’t want to be late.  Duke Bale had been responsible for several members of Gorg's family being turned back into the stone from which they'd been born, and his Uncle Grk had, in the next heavy rain, been dissolved back into the clay of his home mountains. Gorg had vowed that the Duke would pay.

A league beyond the lone willow, Gorg found the road to the Valley of Baleful Stones, Duke Bale's family holding.  The name held a charm that would captivate the ordinary troll, but Gorg knew that all he would find in the land of Bale would be deceit and disappointment.  Probably even the stones would be untrustworthy.  He turned west on the road, and switched his giant stone war hammer from his left shoulder to his right.

He knew he grew close when he began to smell rotten eggs.  The Baleful Stones of the valley's fame were the disfigured sulfurous mounds deposited by a volcanic vent that ran length of the north side, and the entire valley stunk of it.  Gorg thought it only fit, for the heart of Duke Bale stunk still worse.

Now he could see the castle in the distance, and he shifted his war hammer back to his left shoulder, and tried not to breathe too deeply.  Even trolls disliked the sulfurous brimstone, and would neither eat it nor live near the volcanic vents that produced it.  Only Duke Bale, banished nephew of King Celery the Half-Wit, would do so, and he, Gorg thought, only because he'd been sent there by royal decree.
#

In the depths of the ugly castle that crouched as far as it could from the sulfur vents, the Duke studied his plans for the thousandth time.  Soon, his fool of an uncle would know that Bale was plotting to dethrone him.  But by then, it would be too late.  He studied the device that the sorcerer Stenrick the Brilliant had made for him.  Soon, he would have Stenrick go out to meet the pesky troll, that persistent annoyance of a Gorg.

Bale hadn't meant it to work this way when he'd sent Mergle to kill the group of trolls that had stumbled into his secret mines.  But Gorg had proved useful.  Mergle thought too much of himself, and had attracted the attention of the swordswoman--what was her name?  And what had become of her?  She hadn't caught Mergle.  Gorg took care of that one.  But Mergle had drawn the attention of the King, and so had become a liability.  Gorg, poor stupid troll, had done him a favor, Bale reflected.

Now Gorg was coming here, and would meet with Stenrick.  One or both would be killed, and Bale rather hoped it would be both.  He would have to take care of whoever was left before he could take care of the King.  Ordinarily, Bale would have been no match for either a sorcerer or a troll, but Stenrick, the fool, had given Bale all he needed, and now Bale no longer needed Stenrick.

Near the edge of the valley, in a cleft well hidden from the road, the half-magical balloon swayed gently, its silk bag filled with the gasses from the vent it covered.  Bale would be high in the basket suspended below the balloon when Stenrick blasted Gorg into a pile of rubble with the spell he called the "Atomic Blaster," whatever he meant by that.
#

Gorg came on into the valley, and didn't falter when he saw the billowing robes of the sorcerer approaching.  Stenrick was a far greater sorcerer than Mergle had been on his best day, but Gorg knew what he could do.  Shifting the war hammer once again to his right shoulder, so as to leave his more powerful left hand free, Gorg scooped up a selection of stones.

The first stone to leave the sling struck the wand from Stenrick's hand.  The second slew the sorcerer as he stooped to retrieve it.  Gorg came on, stepping on the man just to be sure.  No one survived a troll walking over them.

Gorg's remaining stones were flung after the balloon which suddenly rose from the rocks nearby and soared into the sky, Bale leaning over the edge and jeering.  Those that hit the balloon bounced uselessly off.  Only one stone struck something solid, and Gorg didn't know of that.  The wind carried Bale out of sight before the Duke discovered that Gorg had put out of action the magical appliance that controlled the balloon's flight.

He was at the mercy of the winds.  Gorg had won another round. 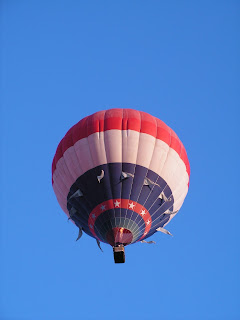