This week and next, Chuck Wendig (usual disclaimer about NSFC) has set up an interesting challenge: write a thousand-words and leave us with a cliffhanger.  Then we hope another writer will pick up on the challenge and write the conclusion.  Not to worry: if they don't, and probably even if they do, I'll be back to finish the story myself.  But next week I'll be finishing someone else's story.

Update: Find Jemima Pett's continuation of Gorg's story here. I'll be back eventually to offer my own completion--though hers might find it's way into a revised version of my version. . .


Gorg In Pursuit of Bale (Part one)


Gorg the Troll stood amidst the sulfurous exhalations of the Valley of Baleful Stones and watched the balloon disappear into the distance.  Aboard was the one human Gorg really wanted to kill, Duke Bale the Artichoke-Hearted.  Now Gorg had no way of reaching him, no way of knowing where he would alight.

Despite the slanderous stereotypes about trolls, Gorg was a peace-loving person, if a troll can be called a person.  Entity.  He was a peaceful entity.  Only, in the last month, he’d killed two sorcerers.  Both had been servants of Duke Bale.  The first had turned several members of Gorg’s family back into stone, at Bale’s command.  The second had been trying to prevent him from reaching Bale to exact the revenge both troll and human tradition demanded.  He hoped Bale would be the third and last.

To kill Bale, he would have to find him.   Gorg turned in the direction of the wind and began walking.

Three days later, Gorg had left all signs of sulfurous stones behind, and found the land climbing steadily.  The rock here was different, lighter and more appealing, with a slightly spicy flavor and a good crunch.  The air was better, too.  The balloon was long gone from sight, but Gorg kept following the wind, hoping he would eventually hear word of the Duke.

Unfortunately, he heard no word of anything, because the lands he traversed lacked inhabitants, at least who could speak.  Gorg tried to talk to the coyotes, but they wouldn’t stop to chat, and he didn’t even know what some of the other creatures were.  The land kept climbing, and he saw more small furry animals, but nothing that could talk to him.

It might have made more sense to go around the mountains, return to the lands of men and wait to hear of Bale.  But Gorg had a simple mind.  He’d set out to follow the winds that had carried his enemy out of reach, and he continued to do so, day after day.  Fortunately for Gorg, it was summer, so he didn’t freeze.  Gorg was a Drylands Troll, adapted to deserts.  Heat didn’t bother him, and trolls didn’t drink except for pleasure, but he had no experience of cold.  Even in midsummer, as he climbed higher he began to find nights a bit uncomfortable.

If Gorg had been more of a thinker, he might have gone to seek out a representative of the king.  It was the king who had banished Bale to the Valley of Baleful Stones, and it was the king, ultimately, that Bale was after.  King Celery the Half-Wit wasn’t much good, but his ministers did make a point of keeping track of would-be regicides, if only in case they wanted to make use of them.  For the most part, though, the ministers, like most of the denizens of the kingdom, preferred a king who did very little.  They had no wish to allow Bale to succeed.

They would have been happy to help Gorg achieve his goal, had they but known of his single-minded pursuit of the killer.

###
Gorg paused in his pursuit of the long-vanished balloon.  The wind had changed direction.  It no longer led him up the mountains, but now blew along the face.  Even Gorg knew that the balloon was far ahead and probably not following the same winds, even if it were still aloft.  But he had no other guide.  When he pursued the sorcerer Mergle, he’d been guided by a magical trail left for another.  When he crossed the Iron Desert to find the Valley of Baleful Stones, he’d followed a tip from a gnome met in a tavern.  Now he followed the wind.

What he was rapidly learning didn’t make sense was to attempt to traverse the faces of the mountains.  Now, instead of climbing steadily, his route took him constantly up and down, clawing his way up steep slopes and crumbling glacial moraines—though those provided a variety of interesting rocks on which to snack—only to drop again into deep valleys and fathomless gorges.

What’s more, as he went north along the range, the slopes grew steeper and more challenging.  Trolls are made of stone, and climb well because they can cling to that from which they were born.  But even Gorg was beginning to find some of the canyons a bit precarious.  And nearly every one was filled with a roaring stream of milky water, laden with grit and rolling stones.  Gorg was less comfortable with water than stone, though his immense stony weight allowed him to ford streams that would have washed even the boldest human away in seconds.

And still he would not digress from following the wind.

Inevitably, the worst happened.  Gorg was partway down yet another cliff when he looked below for the first time.  In the dark, shaded depths of the canyon, he caught the gleam of water.  He descended a bit further, fingers and toes growing into the tiny cracks in the wall that allowed him to scale cliffs no human could.

Now he could see that the water filled the gorge.  Completely.  Worse, it was not rushing past as the other streams had done.  This water lay still, its dark surface suggesting unknown depths.  Gorg froze.  Only one thing could stop his pursuit of Bale, and now it seemed he had found it: deep water.  No troll could swim.  That would be expecting too much of a being made from stone.

Unable to more forward, equally unable to grasp the need to go back or around, Gorg froze in place, sending deeper and deeper roots into the stone of the canyon while his mind sought desperately for answers.

In minutes, he would be too deeply attached to the stone to move again.


Yeah, I know.  The whole cliff thing was supposed to be metaphorical. But hey, sometimes I'm just feeling literal. . .  So sue me. 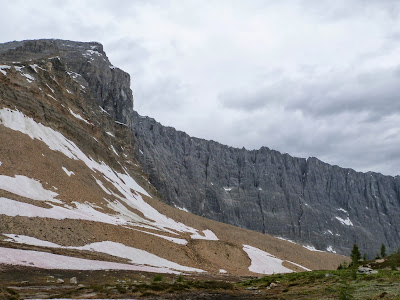 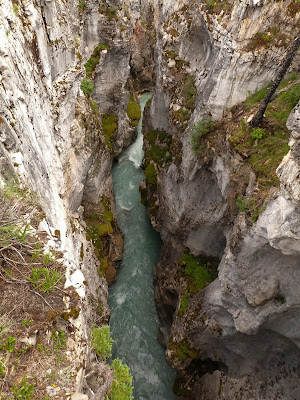