Book Review: Wonderful Life: The Burgess Shale and the Nature of History 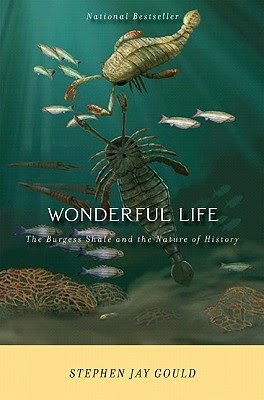 Wonderful Life: The Burgess Shale and the Nature of History, by Stephen Jay Gould.  347 pages, including notes and index.
Published by W.W. Norton, 1989

Summary:
This non-fiction work is a combination of history and science, recounting both the discovery and interpretation of the 530-million-year-old creatures in the shale, as well as the significance of these followers of the "Cambrian Explosion" when the variety of life took off.  He covers both the personalities and discoveries of the major players in unraveling the mysteries of the Burgess Shale creatures, and also the ways in which their discoveries changed our understanding of evolution.

Review:
Gould's subtitle might make one wonder about the connection between such early creatures and, say, Washington crossing the Delaware, but that's because we tend to think of history as human history.  The history Gould is considering is the history of all life, and really it's about the nature of evolution.

The book tells two stories, then: the human history of discovering, misinterpreting, and re-interpreting the fossils from high on the side of a mountain in the Canadian Rockies--and the scientific history of how life on earth got from the weird creatures depicted on the cover to, well, us.  The two threads are seamlessly intertwined, and the one helps illuminate the other, so that my improved understanding of paleontology helped me to understand the interpretations made by scientists along the way, and their journey to understand helps me grok the process of evolution.

I won't try to reconstruct Gould's argument or purpose.  Suffice to say that I cam away from the book with a better understanding of both earth's history and the evolutionary process, as well as some interesting anecdotal history about paleontologists.  Also with food for thought, as Gould asserts--and fairly convincingly supports the assertion--that the element of chance in evolution (something like chaos, I think) means that the emergence of mammals as the top animals, let alone of humans, was highly unlikely, rather than the inevitable result of a constant development toward the "best" design. (Since evolution is about survival and reproduction, it doesn't necessarily support the "best"--only the "good enough".)

The book is intended for a lay audience, but Gould does assume a certain familiarity with the basic concepts, though he does a good refresher on the key points.  I found the paleontology about as complex and in-depth as I'd want to go, and did find my eyes glazing from time to time.  Not surprisingly (I am an English Lit-and-history type, after all!) I found the human stories more accessible and engaging.  His analysis of why Charles Wolcott, the original (1909) excavator of the fossils, went so far wrong is a fascinating study of our human ability to see what we are looking for.

Gould is an excellent writer of science for the normal person, and I can recommend the book to anyone wanting a better understanding of the origins of life and evolution.
Four stars (I'm dinging him a bit for losing me in some of the technical stuff. which might not be fair, but there it is).

For fun: the reason I read this book is that this summer, on our vacation trip to the Canadian Rockies, we hiked up past the Wolcott quarry and did a little searching on our own hook for the fossils.  You can't enter the quarry, but there are lots of lower-quality fossils in the shale either side of the trail below it.  The visit required a 12-mile hike with 3000' of elevation gain (and loss again, which is what hurt most), but added great views to scientific interest. 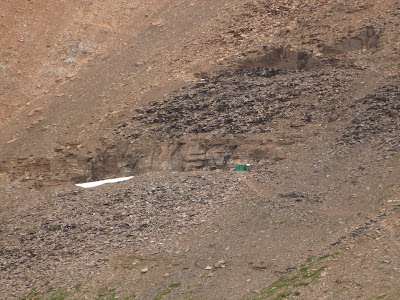 My best fossil.  I have no idea what it was. 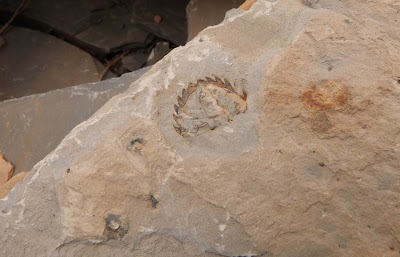 The view from the Wapta Highline Trail just below the quarry. 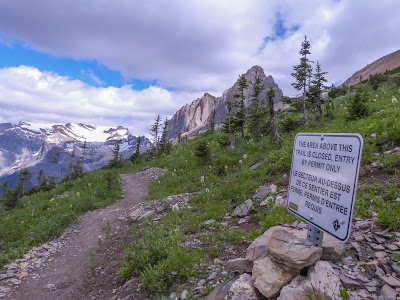 Full Disclosure: I bought Wonderful Life at the Visitor's Center in Banff National Park, and received nothing whatsoever from the author or publisher in exchange for my honest review.  The opinions expressed in this review are my own and no one else's.  They also reflect my understanding of the subject matter and any errors therein are mine and not Mr. Gould's.
Posted by Rebecca M. Douglass at 6:00 AM