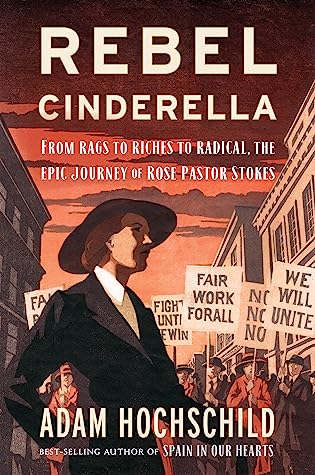 Title: Rebel Cinderella: From Rags to Riches to Radical, the Epic Journey of Rose Pastor Stokes

Rose Pastor arrived in New York City in 1903, a Jewish refugee from Russia who had worked in cigar factories since the age of eleven. Two years later, she captured headlines across the globe when she married James Graham Phelps Stokes, scion of one of the legendary 400 families of New York high society. Together, this unusual couple joined the burgeoning Socialist Party and, over the next dozen years, moved among the liveliest group of activists and dreamers this country has ever seen. Their friends and houseguests included Emma Goldman, Big Bill Haywood, Eugene V. Debs, John Reed, Margaret Sanger, Jack London, and W.E.B. Du Bois. Rose stirred audiences to tears and led strikes of restaurant waiters and garment workers. She campaigned alongside the country’s earliest feminists to publicly defy laws against distributing information about birth control, earning her notoriety as “one of the dangerous influences of the country” from President Woodrow Wilson. But in a way no one foresaw, her too-short life would end in the same abject poverty with which it began.

By a master of narrative nonfiction, Rebel Cinderella unearths the rich, overlooked life of a social justice campaigner who was truly ahead of her time.

I found this a fascinating look into a bit of American history that doesn't get talked about much in your school classes. The story of Rose Pastor Stokes' life is pretty amazing, but for me the real value of the book lies in the context, which is pretty well presented. In essence, the story becomes the history of socialism in America, with the pluses and negatives of both sides--socialism and the fierce anti-socialist--clearly expressed.

Actually, I would say that the author is fairly sympathetic to the cause of socialism, while reporting the ways in which the movement went off track. The Russian Revolution clearly presented a special challenge to the movement, though it was WWI that truly derailed the socialist cause.

The character of Rose Pastor Stokes is interesting, and it is clear that her work with the union movement, rights for workers, and the need for safe working conditions was significant (and, as usual, overlooked in the history we studied in school). The narration by Lisa Flanagan was professional and transparent--it doesn't make the book, but nor does it mar it.

This is well worth a read to understand more fully the history of socialism, and the goals of same. It's worth knowing the extremes our nation went to to suppress socialist views, which were considered inimical to the war effort, during and after WWI.

FTC Disclosure: I checked Rebel Cinderella out of my library, and received nothing from the writer or publisher for my honest review.  The opinions expressed are my own and those of no one else.  I am disclosing this in accordance with the Federal Trade Commission's 16 CFR, Part 255: "Guides Concerning the Use of Endorsements and Testimonials in Advertising."

Posted by Rebecca M. Douglass at 12:00 AM No comments:

Time for a quick update before Thanksgiving.

As I've noted, I'm being a NaNo rebel this year, not trying to draft a novel, but rather to sort and edit 50,000 words of short fiction into collections. And how's that going? Well, I think. I passed the 40k mark (including whatever else I've written this month, and the final edits on Death By Donut) late last week, and have three collections ready for final edits and formatting, with stories for a fourth tagged but not yet edited.

I have also written a guest post for the WEP--watch for that to come out on Wednesday, I think--and tackled some challenging computer issues (which turned out not to be as bad as expected). Editing mode has been good to me, and as readers saw on Friday, even led to writing a whole new bit of flash fiction just for the heck of it.

That being the case, I feel like I do have something to be thankful for this week, in addition to friends and family who are holding me together, largely from afar.

To my US readers, have a good, and safe, holiday. To those elsewhere... be thankful anyway. 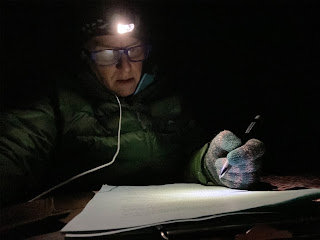 I've been re-reading and working over so many flash fiction bits for the collections I'm assembling, it felt like time to write something! I stumbled on a title generator, and tweaked this a bit from what I got. With wind and talons, it obviously had something to do with dragons. I enjoyed writing it, and hope you enjoy reading it!

Night of Wind and Talons

The crowd of young people waited in a silence that bordered on the unnatural, yet was essential. The night when the dragons came in was too important for whispers and nervous giggles, certainly too important for wisecracks and horseplay, however much those waiting and watching might have appreciated the release.

Seventy-five young men and woman had spent their lives preparing for this moment. Within the hour, some would be dead, some would be broken and left behind—and some would have achieved the end to which they had been working all their lives.

In the center of the crowd, Erlan and Marda stood close together, holding hands. That was against protocol, but it wouldn’t have stopped them. The twins had always stuck with each other, especially in times of stress.

When the testers had come ten years before, to see if either was suited for dragon-training, they had been terrified that one would be chosen and the other left behind. The twins now knew that would never have happened: the telepathy they shared with each other was exactly what was being sought.

Tonight, after nine months in one womb, and nineteen years of sharing everything, they would be parted. No matter what the outcome, they could never mingle their lives the same way.

At least they could share their fears, unlike the other seventy-three candidates. Chosen and nurtured for their empathy, nonetheless they had no telepathy.

I’m scared. Erlan was never afraid or ashamed to admit he was scared. Marda didn’t usually share that willingness, but Erlan knew anyway. Tonight, she gripped his hand tighter.

Scared to death. What am I going to do without you?

Maybe we’ll be near enough to stay in touch, Erlan consoled her, meaning in touch through their mental speech.

Marda didn’t answer, even in her own mind. They both knew that if they were chosen, their dragons would take them to their homes, and they would have to give up human bonds for dragon bonds. If they weren’t, and survived the Choosing, they would be sent to whatever labor units needed workers—and those units kept men and women apart. The dragon-trained were thought too unstable to be allowed to marry, and the only way to prevent that was to prevent all contact with the opposite sex.

Being Chosen for the dragon training was both an immense honor—and a life sentence.

A sound like a strong wind in the distance began to be audible, and grew louder by the second. The crowd flinched as one, but no one made a sound. The first test passed with no failures.

The second test came when the phalanx of dragons burst over the ridge into sight, talons extended, illuminated by the flames they breathed from out their nostrils. Two of the candidates dropped to their knees and began to moan in fear, and the others moved away from them, leaving clear spaces around each as everyone strove to separate themselves from the failures.

Marda watched the dragons, her head thrown back to give her a clear view, her eyes scanning for the one—the dragon she suddenly was sure she would find. Next to her, she felt Erlan stiffen as he, too, felt it. She couldn’t tell which of the huge winged creatures was calling to her spirit, but it was up there. She was up there.

Marda tried to count the dragons, anything to keep her mind focused on something other than her fear. It was impossible to be accurate, but she thought there might be as many as fifty dragons. Dared she spare the attention to pity the ones who wouldn’t be chosen?

The dragons wheeled overhead, flew off, and came back. The candidates, well trained to expect this, took the signal and broke formation, spreading themselves well apart, making room for the dragons to swoop in and make their selections.

At last Marda and Erlan had to drop hands, and neither had the time to form words, but each felt the other’s thought: Good-bye! I love you!

Then the third test. One by one, the dragons swooped low over the candidates, reaching for their chosen partners. Sometimes, on the way in, they knocked other candidates sprawling with wing or claw, or singed them with fire-laden breath, and Marda could see how so many were killed or injured each year. Several more broke under the tension and ran for the distant buildings, or for the river.

Marda and Erlan stood and waited, until she felt the call, the instruction. With a wild glance at her twin brother, she took a dozen rapid strides to her left, leaving twice the required distance between them. She wanted to ask Erlan what was happening, but her mind was now fully focused on the one who had chosen her, though she still couldn’t sort it out from the crowd.

Now she saw, and saw something that she had never heard of: two dragons flew towards her and Erlan side by side, in formation. At the same instant they folded their wings high over their backs, dropping like hawks on the twins. Still in concert, they snatched the young people in their talons and unfurled their wings. The two dragons, chosen partners clutched firmly in their talons, wheeled in unison and flew for the ridge.

At last Marda could clearly hear her dragon—and to her amazement, the other dragon as well.

We have waited long for a matched set like you two, Marda’s dragon said in her mind.

United, Erlan thought at them all.

Their night of wind and talons had been nothing like they’d expected. It had been far, far better.

All images and text ©Rebecca M. Douglass, unless otherwise indicated.
As always, please ask permission to use any photos or text. Link-backs appreciated!