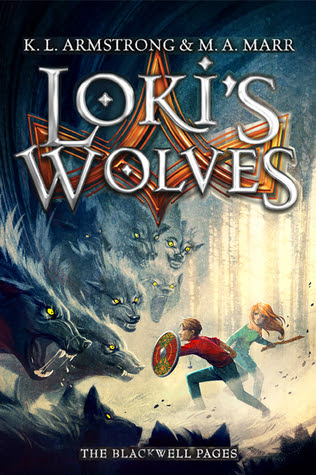 Loki's Wolves, Part One of the Blackwell Pages, by K.L. Armstrong and M. A. Marr
Published by Little, Brown and Co, 2013  358 pages.
Source: Library.  Pulled off the New Book shelf because it looked interesting.

Summary:
Matt Thorsen knows he is a direct descendant of the Norse god Thor.  He just doesn't know that he's going to be the one who has to save the world.  He's only 13, even if he is big for his age, and now he's supposed to create a team of other descendants of the gods and go out and keep the world from ending.  It doesn't help that the children of Loki, the Trickster God, aren't very fond of him, but he persuades Fen and Laurie to join his quest, and they have the start of a team.

Review:
Right up front I need to say that this book does two things I'm not wild about.  The first is minor, and is overcome by a gripping story.  I'm not really that crazy about the supernatural kids in a normal modern world, but that's a matter of taste and it's well done.  I am even less crazy about cliffhanger novel endings, so consider this a warning: this book stops in the middle.  There is a modest sense of resolution--a few things are figured out--but the story is too incomplete for my taste.  Again, this is not something that necessarily means you won't like it.  You just need to know that.

I was fairly quickly drawn into the story, once I got past a little reluctance about the setting issues (see above and my personal tastes).  The book is liberally illustrated with full-page black and white pictures which look a bit like Manga, stylistically.  They don't do a lot for me, but again, that's taste.  By the time I was 50 or 60 pages in (not that far, really, with so many pictures and lovely large clear type) I was pretty hooked.  By the mid-point, the action heats up and really doesn't stop, so it's a gripper.  Relationships are a bit simplistic, but these are Junior High kids--they are big on drama, but not very good at self-knowledge.

The story is told by an omniscient narrator, and the authors have done a good job with that, so that there's always clarity about who's perspective we are seeing from, and no feeling of head-hopping.
The writing is generally tight and smooth, and there were no editing or proofing issues that leapt out at me (except maybe a bit of geography, but that's not a huge issue and I only know because I checked on the map).

Finally, to think about this in terms of the on-going discussion here and on Goodreads about kids without parents, most of these kids have parents--good and bad.  But the parents are pretty undeveloped, and are very quickly left behind.  The authors have for the most part chosen to removed the kids from the help and guidance of adults, who on the whole become, not exactly the enemy, but impediments to the much more important task the kids face.

I think that any kid who likes Rick Riordan or Harry Potter will like this, and the saga promises well.  I just would prefer not to have to wait however long it takes to bring out Book Two!

One final note: it's a bit of a shame to vilify wolves as this book does--they are for the most part the fighting arm of the badguy side.  In the real world wolves have enough of a bad rap without this.  But, then, these are werewolves, not the real kind!


Full Disclosure: I borrowed Loki's Wolves from my library, and received nothing whatsoever from the author or publisher in exchange for my honest review.  The opinions expressed in this review are my own and no one else's.
Posted by Rebecca M. Douglass at 6:00 AM