Every Author Needs a Mission Statement

I just stole this idea from Gus Sanchez and his blog, Out Where the Buses Don't Run.  (An idea he freely admits he stole from another blogger, who stole it from another. . . you get the picture).  Or, rather, I'm taking up the challenge Gus issued after a bit of discussion with his readers, that every author should craft a mission statement, just as a business or a non-profit has a mission statement to explain why they bother doing what they do.  So here's my attempt.

I write to have fun creating stories that others will have fun reading.  To justify my fun, I also make a  commitment to the hard work that lies between my fun and their fun--revision, editing, and proofing to make visiting my worlds an escape from reality with no bumps on the road.

Or maybe I should just refer to my experience a couple of weeks ago with the children who see me as an author first and foremost, and stick with that mission: Don't make liars of those children.  Sit down and write.

That's a pretty all-encompassing mission statement for an author.
Posted by Rebecca M. Douglass at 9:45 AM 2 comments:

Is this a mid-life crisis?

Last weekend I went off and did something completely out of character.  Under normal circumstances, I'm a pretty boring person.  I don't do wild things (except for going into the wild with my family for days on end, but around here we consider that normal).  I don't spend money unless you pry it out of my wallet with a crowbar, and I don't party. You get the idea.  Just another middle-aged housewife who's excessively responsible and well-behaved.

So, like I say, I stepped wholly out of character last weekend.  I left my family behind, flew to Colorado (yup, spent a boatload of money just on me!), met up at the airport with someone I know only from the Internet and drove with him into the mountains to hike before joining a whole lot of other folks, only of few of whom I'd ever met in person, at a campground to party (okay, talk and eat and watch others drink--I was suffering too much from the altitude to touch alcohol).  Then on Saturday, we all took off to hike.  In further proof of my insanity, I went off with a group to climb 14,295-foot Quandary Peak.

That's right.  I spent money on myself, partied with strangers (well, sort of strangers.  Strange folk, anyway, though I mean that in the nicest way), and climbed to over 14,000' barely more than 24 hours after leaving sea level.

But it was a lot of fun! 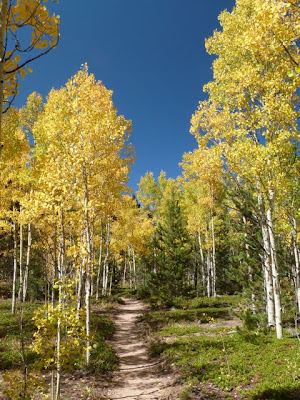 Me on the far right hoping my coffee cup will hold me up and keep me going. 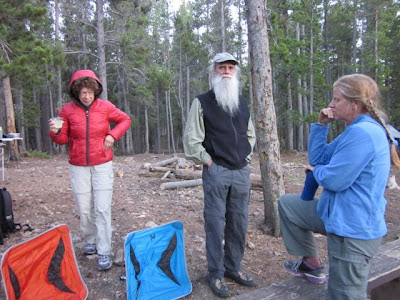 Mountain goats  along the way refused to carry me to the top. 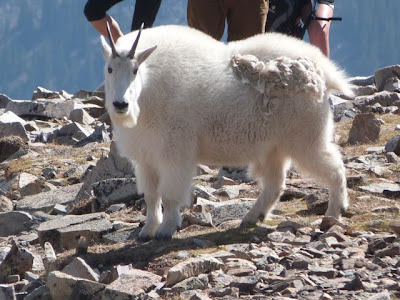 The triumphant author, clutching the summit post to avoid falling over.  Oxygen is NOT over-rated. 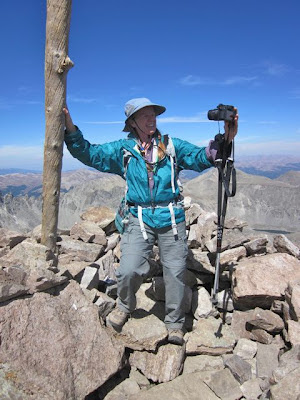 Holy carp it's a long way down from here! 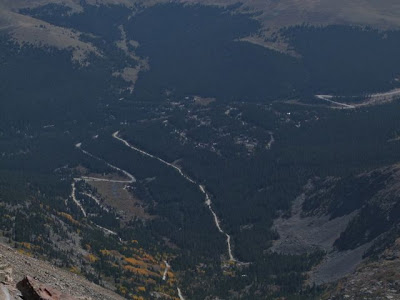 Our group on the summit.  Almost all of us are sea-level types, and for I think 4 of us it was our first "14er", so we were excited! 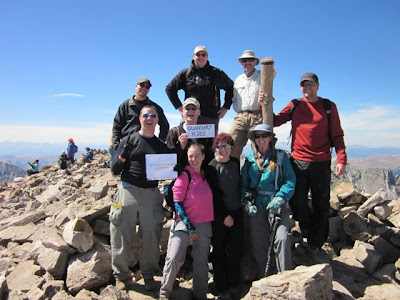 Posted by Rebecca M. Douglass at 9:16 AM No comments:

I don't really believe in much of anything supernatural, but lately I've felt a bit that I must have offended the appliance gods.  In any case, appliances have been dropping like flies around our house.

First it was the dishwasher.  I had noticed a little leakage earlier this summer, but managed to convince myself it was spills or something.  I don't know how long the thing had been leaking a lot more than a little, before I wandered into the kitchen in bare feet and made a nasty discovery.  (As a note, I don't go barefoot much around my house, because the temps in here seldom rise above what it takes to freeze my feet.)  So I step up to the kitchen sink, onto the little mat thing I keep there to. . . not sure what.  Catch the drips?  Catch the crumbs?  On reflection, it doesn't make much sense.

It does work as a signal, however.  One bare foot on the mat, and. . . .squoosh.  The thing's sopping wet!  Naturally, I then spend 20 minutes pulling everything out of the under-sink cabinet to find the leak, since it must be the drains.  And, in fact, I DID discover that the seal around my faucet has worn out, and bits of water are getting through.  But nowhere near enough for this flood.

Making a note that if I have to unfasten and re-seat my faucet, I am by George going to get a new one that doesn't look 13 years old, I dry out the rug, lay it back down, and. . . it's soggy again the next morning.

About this point I realize that the also-13-year-old dishwasher is suffering some lack of structural integrity.  This may be where the karma comes in--it heard me talking about maybe replacing it, as it doesn't seem to work as well as it used to, and all the little rack peg things are rusting.  It should have known me better.  With my cheapskate nature, I seldom replace anything unless it's definitively dead.  Since the leak wasn't hoses or connections, but something structural, this qualified.

So, I schlepp out, buy a new dishwasher, spend an evening and a morning installing it, and have no sooner recovered from most of the aches, pains and scrapes incurred in the process, than my 2-year-old microwave dies.  In the worst way: everything works except the thing that makes the stuff get hot.  Estimate for repairs: $200 to $400. So. . . another appliance, another painful installation (it's the over-the-stove kind), delayed for days because the spouse is always at work and the boys not quite strong enough or tall enough to help me.

And that has to have been appliance revenge.  I mean, two years?  What's next?  The 13-year-old fridge (yeah, we remodeled the kitchen--wait for it!--13 years ago!)?  Or will the water heater of unknown vintage give up with a sigh, or a burst, probably while the house is full of company (hey!  Lots of help in installing a new one!)?

I wonder if a couple of sponges and a dishrag would be an acceptable sacrifice to appease the appliance gods, or if I need to give up my favorite coffee cup?
Posted by Rebecca M. Douglass at 5:33 PM No comments:

Today I got the biggest thrill of the last several months.  A grade-schooler recognized me in the grocery store and told her mom, "She writes the Ninja Librarian book!"

Yup, my first groupie.  First time anyone has spotted me as a writer.  Not the Library Lady.  Not the PTA lady.  The one who writes the Ninja Librarian.

I was still glowing from that one when I stopped by a friend's house, and one of the many kids around there (another from that same class) started telling everyone how I'd come to his class and read two chapters of my book.  Finally he looked at me and said, "You're an author."

This kind of thing is exciting for me, new as I am to being published.  But it also made me think.  Having people identify me as an author means I need to be an author.  Every day.  Even when I don't much want to write, or think I have no inspiration.

Because that's what authors do, and I don't want to make liars of those kids.
Posted by Rebecca M. Douglass at 5:52 PM 2 comments: