I didn't get anywhere with the Chuck Wendig prompt this week, so I decided to go back and do another from last week's settings.  I really liked the idea of "a Starbucks at the end of the world" so I took that and ran with it.  A note on the science of this one: it's bogus.  Climate change is real enough, but the rest I totally made up.  To the best of my knowledge, caffeine is not holding the physical world together, only the social one.  I have no idea if coffee bushes could grow at high latitudes.  And I'm almost 100% sure that sacrificing caffeine-hyped 20-somethings to volcanoes will not prevent them erupting.


In a Starbucks at the End of the World


No one ever said the world would end like this.  In all the movies and novels, the apocalypse was always about zombies and explosions and asteroids, or the sun going nova.  Nuclear war.  That sort of thing.

No one, ever, thought it would come this way.

Oh, everyone knew that climate change meant big trouble.  Rising sea levels, bigger storms, more fires out West.  It got to be routine, cleaning up after disasters.  And farmers—they adjusted their methods, moved into new areas as some grew too hot or too wet for farming.  It’s hard to farm beneath the ocean, but it seemed like there was always somewhere to go.  And we never noticed the bigger threat, never saw it coming.

Coffee is grown in parts of the world most First World people just don’t think about much.  Somewhere way off in equatorial lands, coffee plantations were moving gradually up the mountains, and sometimes farther north.  But coffee doesn’t adapt well to some things, and even warming northlands aren’t the same as old-style equatorial highlands.

When people talked about adapting to climate change and shifting toward the poles and all that, they forgot one thing: climate change doesn’t change the length of the days.  Some plants love the long summer days.  Cabbages and squash are happy to grow 24/7 for a few short weeks.  Tomatoes, not so much.  And coffee, not at all.  Efforts to introduce coffee bushes in Canada simply failed.  Every one died, after a year or two of refusing to produce a single coffee bean.  So the growers stuck with moving higher up the equatorial mountains—and then they ran out.  Nowhere any higher to go.  Fine, everyone said.  Coffee’s a luxury.  People don’t need it, except maybe a few crazy writers.

Somehow, while no one was paying much attention, coffee had become the glue holding the world together.  And I don’t just mean us humans, though civil society was the first to go.  People in caffeine withdrawal get testy, and civilization began to collapse pretty fast.  They tried to switch to tea, but most tea cultivation had already been lost, to rising seas and rising temperatures and everyone drinking coffee instead.  And it just didn’t do the same thing.

That’s how I ended up here, at Starbucks.  The coffee source.  One on every street corner from Boston to Bombay.  Before the collapse, they had spread literally everywhere.  Tiny villages in Africa and the Andes.  Now those remote Starbucks were the last places with any beans, mostly because they never did much business.  Most have been raided or run out by now.  Maybe this Starbucks is the only one left, in a deserted mountain village so remote no one ever knew we were here.

The coffee is stale now.  It’s been three years since there was a coffee crop, and the strange fellow who runs this place saw it coming.  He bought up every bean he could find—the stuff the big buyers wouldn’t touch, the sweepings from the floor of the dryer buildings, anything the local farmers would sell him.  He even tried to keep a few bushes going in his own yard, but in the second year they died along with the last of the commercial plants.  The wild ones were long since gone.

I had already moved here, hoping to solve the problem at the source before it was too late.  All I’ve managed is to be one of the last survivors.  When the crop failed most people left this place.  Only the owner and I are here now, with our dwindling supply of coffee beans.

While the Coffee Riots destroyed Seattle first, San Francisco, New York, Paris and London weren’t far behind.  Then the smaller cities in every country around the world.  Smart people migrated outward, buying whole beans and Folger’s ground with equal abandon, and hoarding it all.  Perhaps a few of them are left, but I fear most were killed in the panics.

Civilization is gone, but it’s worse than just that.  I’ll die before the end, because our beans are nearly gone too.  But I’ve seen the beginning of the end.  With the caffeine removed from the water cycle, entire ecosystems are collapsing.  In the hundred years since the first Starbucks opened in Seattle’s Pike Place Market we have grown, ground, brewed, drunk, and excreted so much coffee that no water supply on earth is untainted.  Because it happened slowly enough, the ecosystems adapted.  But the change back has been too sudden.

I wasn’t surprised when the marine animals began dying off.  But it shocked me when it hit the trees.  First to go were the great forests of red cedar and fir up along the coasts near Seattle.  That made sense.  But it spread, and with the loss of the forests came a huge influx of carbon into the atmosphere, which spelled the end.

It no longer matters that even the tectonic plates seem to have been made restless by the loss of coffee from the hydrologic cycle, because it’s already too late for earth.  Oh, the planet will be here.  I suppose it’s not really the end of the world, just of all living things as we know them.  Including us, of course.  But I won’t be here to see the super-heated ball this globe is bound to become, because the volcano is restless and uneasy.  They used to keep it happy with sacrifices of young daredevils.  All fully hyped on coffee, of course, and under the impression they were climbers.  Now the supply of both coffee and daredevils has run out, and the eruption will come any day, and take us with it.

We’re ready.  Without coffee, the two of us here in this dingy, dusty Starbucks on the slopes of a volcano are more than ready to be done.  I can feel the earth shake.  It won’t be long now. 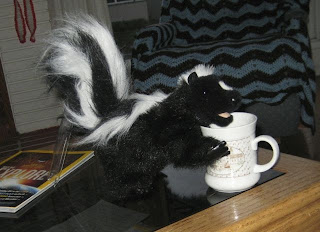