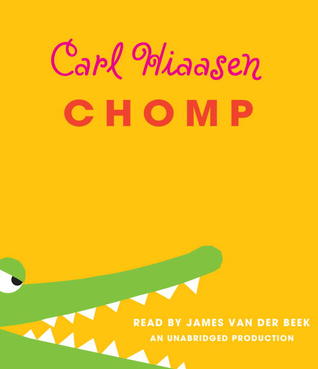 Publisher's Summary:
Wahoo Cray lives in a zoo. His father is an animal wrangler, so he's grown up with all manner of gators, snakes, parrots, rats, monkeys, snappers, and more in his backyard. The critters he can handle.  His father is the unpredictable one.

When his dad takes a job with a reality TV show called "Expedition Survival!", Wahoo figures he'll have to do a bit of wrangling himself—to keep his dad from killing Derek Badger, the show's boneheaded star, before the shoot is over. But the job keeps getting more complicated. Derek Badger seems to actually believe his PR and insists on using wild animals for his stunts. And Wahoo's acquired a shadow named Tuna—a girl who's sporting a shiner courtesy of her old man and needs a place to hide out.

They've only been on location in the Everglades for a day before Derek gets bitten by a bat and goes missing in a storm. Search parties head out and promptly get lost themselves. And then Tuna's dad shows up with a gun . . .

It's anyone's guess who will actually survive "Expedition Survival". . . .

My Review:
I like Carl Hiassen's juvvy/YA novels. I've even gotten used to Florida, where they are all set (an alien space to this Westerner, for sure).  Each one of his books I've read has been the best, which either indicates that he keeps getting better or that I have a poor memory. In any case, this one had a number of elements that appealed. There was, of course, Hiaasen's usual dry humor and use of slightly absurd, over-the-top (I think. On the other hand, Florida may be a bit...different) situations. In this case, he also had a great time doing a marvelous send-up of a certain star of a "reality" survival show (show and star shall remain nameless), especially with the bit about having to eat something disgusting every show. Since the backpacking forum where I'm an active member periodically has fun eviscerating the alleged survivalist for stupid moves and bad advice, I had extra appreciation for what Hiaasen does to poor Derek Badger.

But even aside from snarking at reality TV, it's a great read, with a plot that keeps ramping up to a hold-your-breath finale.

The audio was beautifully done, with characters well distinguished and fully realized.

Recommendation:
I would put this at older middle grade to young adult level--maybe 12 and up. There's no sex, but there is some pretty serious violence, including life-threatening situations and that dad with a fist and a gun. Also perfect for any adult who has ever thought That Show was stupid. Mr. Hiaasen is a powerful advocate for preservation, and his dedication to protecting the Everglades is clear.

Full Disclosure: I checked Chomp out of my library, and received nothing from the writer or publisher in exchange for my honest review.  The opinions expressed are my own and those of no one else.  I am disclosing this in accordance with the Federal Trade Commission's 16 CFR, Part 255: "Guides Concerning the Use of Endorsements and Testimonials in Advertising."