Middle Grade Review: The Turn of the Tide 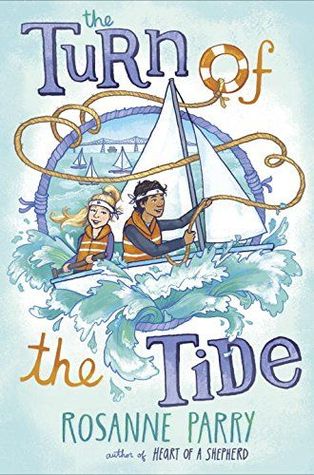 Summary:
(I really didn't like the publisher's summary, which I found misleading), so I'm writing my own this time).

Kai has lost nearly everything he cares about in a tsunami. To make it worse, his parents send him from their devastated home in Japan to stay with and aunt and uncle he scarcely knows in Astoria, Oregon, instead of letting him stay to do the honorable thing and help clean up. His cousin Jet isn't too sure she wants him, either, despite her sympathy for him. She has her own problems. Together, the two find their connection through the thing they both love most: sailing. A summer's adventures in their small boat brings them healing and maybe the way to fulfill their dreams.

Review:
This wasn't a terribly deep or significant book in some ways, but it did offer an interesting take on a number of things (actually, that is my main criticism: I think it took in too many things). Jet and Kai have to learn together to help him find the healing he needs when his long-standing love of the sea collides with his new-found (and not unreasonable) fear of the ocean that brought such devastation to his life and his town. At the same time, Jet has to deal with changes in her friends after a year of Junior High, and she never lets go of her ambition: to be a bar pilot, guiding ships into the mouth of the Columbia--just like her father, and just like exactly one other woman in all the history of shipping in the river. Quite a few things are sorted out in a rather exciting finish to the story (which I really liked), as each of the cousins has to overcome fears to do what needs doing.

Even though I thought the author tried to take in too many things--I'd probably have dropped the whole changes-to-her-friends thread--the book was a fast, engaging read, and I had trouble putting it down once I passed the midpoint. Roseanne Parry has created very real and likable characters, with both good and bad traits, and deals well with the ways their different cultures shaped the two cousins (differences that made it realistically hard for them to relate at first).

I loved the historical note at the end that told about the history of the bar pilots on the Columbia--apparently one of the trickier river mouths around (and there really is, or was, only one female pilot). Part of the interest in this for me is that my mom rather wanted to be a (ship's) pilot when she was growing up, and I always wondered about how true it was that the profession was pretty much not open to women. Seeing how few and far between women are in the 21st Century, I have to concede that it would have been an uphill battle indeed to break into the profession in the 1950s.

Recommendation:
A good read for boys and girls, maybe 9-12, who like adventure and boats, or even just like thinking about boats.

Full Disclosure: I checked The Turn of the Tide out of my library, and received nothing from the writer or publisher in exchange for my honest review.  The opinions expressed are my own and those of no one else.  I am disclosing this in accordance with the Federal Trade Commission's 16 CFR, Part 255: "Guides Concerning the Use of Endorsements and Testimonials in Advertising."
Posted by Rebecca M. Douglass at 12:00 AM