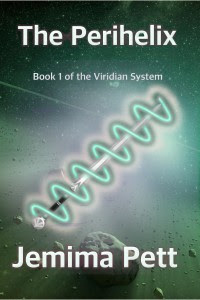 The Perihelix, a new book by Jemima Pett, is launched this week! You buy it at Amazon, B&N, Apple, and Kobo and Smashwords. So, why should you buy The Perihelix?


The Perihelix by Jemima Pett

Book 1 of the Viridian System Series

Two asteroid miners, three women, one spacecraft, and five pieces of a legendary weapon scattered around the galaxy. Big Pete and the Swede are rich, or so they discover after bringing their latest haul of orichalcum in from the asteroid belt. So some well-deserved vacation awaits them. It starts out just fine, with one of the men winning the big flyer-race of the season, but they start to receive odd messages, and despite the attentions from the girls, both realise that someone is trying to drag them back to their pasts, pasts they have tried hard to erase. As they set out to discover who’s bugging them, they are kidnapped by some particularly nasty aliens, which leaves the girls in a mess – stranded on the spaceship with very little idea how to fly it.


What I think of it:

I may be biased, as Jemima Pett is a writing pal and a friend. I read two or three drafts and offered feedback, so of course I think it's great! But seriously, when I proofed the final copy, even knowing the story quite well I couldn't stop reading. I'm definitely in love with the characters! So, you can discount my bias and still know you should read it :) 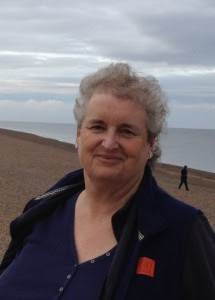 Q: How did you come to invent the characters in your new book?
It was through my regular flash fiction stories on my blog. We'd had a couple of times when I'd ventured into science fiction, once in a Casablanca/Star Wars mash-up which was called Paradisio, and then those characters got mentioned in a Random Title story called the Orichalcum Library, where two asteroid miners wanted to read real books, so the bar owner on another planet got hold of some which had been swapped for food by some fugitives from the Paradisio story. The asteroid miners turned into Pete and the Swede, and there we go.

Q. Why did they end up with three women? Isn't it a bit degrading to bring in your female characters as escorts?
Asteroid miners have a reputation for being hell-raisers when they aren't mining. Pete and the Swede want some female company, and after a while they realise they actually want company, good food, people to enjoy their vacation with, as well as bed companions. So when they found escorts who they liked, they rehired them, and if you can afford more company, then why not? As for why are the females escorts, well, in the Wild West women are generally either bar girls (escorts) or pioneer/ranchers' wives, and I didn't have any ranches around. The Viridian system is very much Outback, and although there are a few women in what you might call 'normal' jobs on Sunset Strip, it's not an area that's easy to get to without a sponsor. These girls have quite interesting futures ahead of them, though, as you'll see when you read the book.

Q. What was the most difficult thing about writing the book?
Having developed my worlds of Pleasant Valley and Sunset Strip, the two inhabited planets of the Viridian System, in part through the short stories, I then had to check the science for them. I've done a course on planetary science, and to me, getting planets that were physically feasible was important. I wanted Sunset Strip to have two sunsets in a Standard day, which led me to realise the difficulties with that, which I've mentioned in the 'world-building' section on the Viridian series website. Now, sorting those worlds out wasn't difficult. But then I realised ALL the other places they go to on their adventures need to be fully realised as well. Oh, boy! Physical characteristics, society, relationships with other planets, weather, occupants.... and keeping tabs on with all with a huge spreadsheet. But it's great fun. As long as my memory holds out!

Q. How do you keep up with the science?
At present it's hard, because in the eighteen months since I wrote the first draft of The Perihelix (at Camp NaNoWriMo) there have been huge developments in the detection of exoplanets - planets around stars outside our own system - and level of detail we've worked out about them. We've also had hugely more information about the outer planets of our own system. What is emerging is that basically, anything goes; a lot of what we thought would be the rule from what we knew of the solar system has been turned on its head. It's really exciting! Most of my updates come from a couple of websites, from other bloggers who report on interesting things, from the Norwich Astronomical Society and from the excellent BBC programmes The Sky at Night and Stargazing Live. And with a #BritInSpace on the International Space Station at the moment, there is more interest in astronomy and space travel in the UK than there has been for years.

Q. What's next for Pete and The Swede?
Well, I've already written about 15,000 words of Book 2, some of which are scenes for later in the book. I have a setting, some propositions and some problems, but I haven't got the solutions yet - except there will be a third book, so I don't have to complete the overall storyline yet, just advance the main issues of book 2 to a satisfactory conclusion. No cliff-hangers!

Thank goodness for that! Thanks for talking to me, Jemima

Jemima has been writing since she was 8 years old, and reading science fiction since she was about 15. She tried writing a scifi book while at college, but was put off writing entirely by a 'friend' who said it was rubbish. Even with a maths degree, a Masters in Environmental Technology and a Diploma in Earth Sciences, Jemima kept writing – although it was mostly manuals, newsletters and research papers. It was only when she moved to Norfolk, on the east coast of England, that she found characters who inspired her to write fiction again – and that led to the Princelings of the East series, now six books long, with the seventh due later this year. Where Pete and the Swede came from is another story entirely, but she thinks the guys who inspired her would probably be flattered, if they realised!
Posted by Rebecca M. Douglass at 12:00 AM