This week's assignment from Chuck Wendig was to write a story in the form of social media.  I had a lot of trouble getting my mind around this, maybe because I don't do enough with social media to have the feel? Or maybe because it's hard. Anyway, for that part of it, I'll direct you to my story Blackberries, written before social media, but in something of the spirit, being told entirely in "honey-do" notes. Then I'll go on and do a photo piece, because I'm really rather caught up right now in my current novel.

I've posted before on the trip over Lamarck Col and into the Evolution Valley, so I'm going to just focus on the off-trail part of last summer's 7-day Sierra trip. Our 3rd day we dropped from the Darwin Bench to the John Muir Trail, followed it a mile, and headed cross-country up to the McGee Lakes.

Departing camp in the morning, and looking across to where we are headed (behind that peak). There is, alas, a very deep valley between, as there so often is. 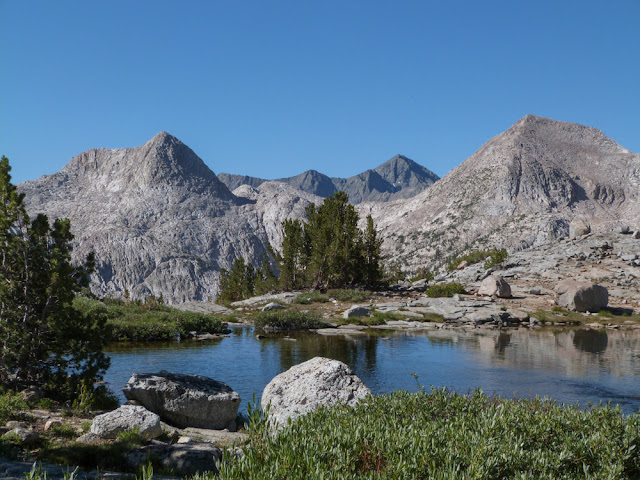 Crossing Evolution Creek. Refreshingly cool water.
Climbing up toward the next level. 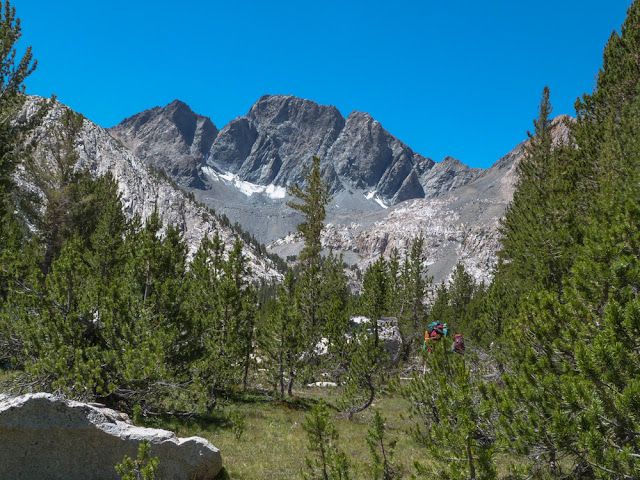 The stream coming down through this meadow provided a perfect lunch stop. Eldest Son lost no time getting his feet wet.
Finally reached the lakes, which were well worth the climb!
We spent two nights at the lakes, giving us a day to explore. The spouse climbed the round peak shown here across the lakes. I climbed farther than I intended up the west side and had a great view back down to the lakes. Our camp was on the peninsula you can see in the photo. By this time, there were no other hikers in the basin.

Our second night we got the first and most mind-blowing of three great sunsets in a row. It doesn't get much better than that: kicked back in a camp chair, watching the light show.