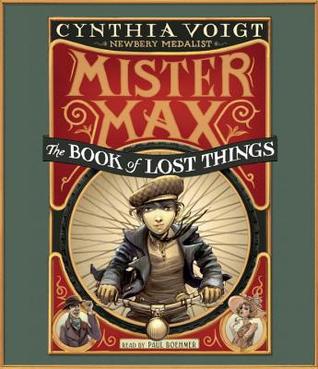 Publisher's Summary:
Max Starling's theatrical father likes to say that at twelve a boy is independent. He also likes to boast (about his acting skills, his wife's acting skills, a fortune only his family knows is metaphorical), but more than anything he likes to have adventures. Max Starling's equally theatrical mother is not a boaster but she enjoys a good adventure as much as her husband. When these two disappear, what can sort-of-theatrical Max and his not-at-all theatrical grandmother do? They have to wait to find out something, anything, and to worry, and, in Max's case, to figure out how to earn a living at the same time as he maintains his independence. This is the first of three books, all featuring the mysterious Mister Max.

My Review:
This was a fun story. Though Max faces some serious issues, the book never loses sight of its essentially humorous nature, with characters a little bit over the top and situations that will make you smile even as they keep you reading to see how he'll solve this one. (As a matter of fact, in many ways Voigt has captured pretty much the tone I aim for in The Ninja Librarian, both with the humorous touch and the focus on solving problems). Max is a great character--he has more resources than your average 12-year-old but a realistic set of issues and concerns as well.

The setting of the story is deliberately left a little vague (again, reminds me a bit of Skunk Corners!), which  overall works very well. I was occasionally a bit frustrated by my tendency to want to know everything, as well as just a bit of desire to sort out what kinds of help and perils he might face. (For those who want to know, it's a 1900-ish setting, though which side of the the Atlantic or what city I couldn't say--quite possibly a port on one of the Great Lakes, but that's not really the point). It feels  like it takes place outside of time and space.

This is the first of a series, and while Max solves most of the problems he encounters, the big problem is only partially addressed, not solved, leaving us poised to leap into Book Two, which I fully intend to do.

The audio narration was excellent. I had no trouble following everything, and characters were nicely distinguished. I can recommend the audio version though may look for the next one in print just to see if I missed anything.

Recommendation:
The writing level is upper elem to middle school, but the content is fine for all ages. I think this would make a great read-aloud for kids from about 7 up, with independent readers from 9 or so able to handle it fine.

Full Disclosure: I checked The Book of Lost Things out of my library, and received nothing from the writer or publisher in exchange for my honest review.  The opinions expressed are my own and those of no one else.  I am disclosing this in accordance with the Federal Trade Commission's 16 CFR, Part 255: "Guides Concerning the Use of Endorsements and Testimonials in Advertising."
Posted by Rebecca M. Douglass at 12:00 AM