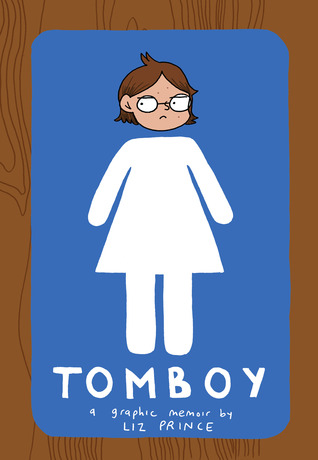 Summary:
This graphic novel explains what it was like for Liz Prince growing up "in the middle"--not a pink sort of girl, but not "one of the guys" either. It wasn't easy even in grade school, but the book really focuses on the struggles that hit in Junior High and High School.


My Review:
I plucked this book from the cart while I was shelving at the library, because the title caught my eye, me being an unreformed tomboy and all. I'm glad I did. It was a fascinating look at gender roles and expectations in our society.

Liz Prince is about 20 years younger than I am, so I expected that our experiences would be different (I was/am also a little different sort of tomboy than she was, because hey, we are all unique!). What I didn't expect was to find that she had a harder time than I did. And I don't think that's just because I was okay with occasionally putting on a dress for a special occasion. I think it's because we were more open to girls and women being themselves in the 60s and 70s than we were in the 80s and 90s--and what about now?

Liz seems to have taken a lot of grief from gradeschool on up for "dressing like a boy." Now, I admit that I don't know what that would have been like, because I was a 1st grader in a time and place when it simply wasn't done. I wore a skirt to school (and changed to jeans the second I got home), until about 2nd grade, when we moved to a place where pants were acceptable (and Dad wasn't the minister anymore, so no one was looking so closely at me). I went ahead and "acted like a boy" regardless, as did most of my friends; we skinned a lot of bare knees. Liz seems to have been surrounded by girls who got very girly from a very young age.

In high school, where she was shunned for wearing (boy's) jeans and no makeup, I finally was free to dress as I pleased, and wore jeans and tee shirts and didn't even own a skirt for years. (Note: I still wear jeans and Tees and no makeup, and I haven't worn a skirt in years). Maybe it was different then because we were all rebelling against a very different generation? In any case, one thing that never seemed to come up were the accusations of lesbianism. Prince faced those just for hanging out with a friend who also dressed like a boy. My classmates might not have known the word.

The weird thing is, I think it was easier to be a tomboy in my generation because people were less aware of all the gender options. For Prince, being a tomboy seemed to require questioning her sexuality, even at a young age. For me and my friends, we just wanted to be boys because they had all the good adventures (in the books we read). And we wanted to wear jeans because they were more suited to running around and climbing trees (plus: pockets). We wore boys' clothes (literally in my case: I wore my brothers' hand-me-downs) and played boys' games, but we didn't try to look like boys. Most of us wore our hair long (because our mothers all cut and curled theirs?).

I've wandered from the review here, but there is method to my madness. The book made me think about gender roles and being a tomboy and how kids (and society) treat other kids who don't conform. And that, I think, is a large part of the point (as well as letting girls who maybe don't fit the standard model know that they are not alone, and that it's okay--and maybe even that not liking skirts doesn't mean you aren't heterosexual?). That is what made this a really good book.

Recommendation:
I recommend this book for everyone who has ever struggled against gender roles, or thought about it, or teased someone who didn't fit the mold, or thought about teasing...you get the picture. I think it's kind of an important book for our teens, and probably for the rest of us, to read. It only took me an hour or two--well worth the time!


Full Disclosure: I checked Tomboy out of my library, and received nothing from the writer or publisher in exchange for my honest review.  The opinions expressed are my own and those of no one else.  I am disclosing this in accordance with the Federal Trade Commission's 16 CFR, Part 255: "Guides Concerning the Use of Endorsements and Testimonials in Advertising."
Posted by Rebecca M. Douglass at 12:00 AM