Okay, we've been here before. Me and backpacking photos, I mean (like every time I don't have a bit of flash fiction ready to go on a Friday!). This trip went into a new area, with a new family configuration--one of our sons was away for the whole month of July, leaving us to backpack as a family of three (weird) (but as the eldest is now at college, something to get used to). Looking for someplace to go after dropping Second Son off at LAX for his trip to Mongolia, we settled on Sequoia National Park, in particular the Mineral King area.

The road in to Mineral King is not for the faint of heart. It takes over an hour, is steep, windy, and only one lane wide. And when you get to the trailhead, the ranger will suggest that you marmot-proof your car, as the little demons have a habit of crawling underneath, then nibbling anything rubber. Like brake lines, something you will really want for the trip back out. We borrowed chicken wire, scrounged our ground cloths, and secured the car before departing.
From the parking lot we climbed up and through Timber Gap, soon putting on rain gear as a thunder storm passed over us. It moved on so that we could stop for lunch at the pass. This was the first climb of the day, followed by a long drop to Cliff Creek.
A second long climb brought us to Pinto Lake, halfway to Black Rock Pass. Our camp there gave us a beautiful view of the sunset, as things had cleared up (aside from the smoke).
While the sun was setting, behind us a full moon rose over the mountains.
Next morning we broke camp under a threatening sky (had to toss the fly back on the tent for a few minutes when a shower came through), and climbed toward Black Rock Pass. We hadn't gone far before the rain started in earnest, with much wind and general unpleasantness, though fortunately (given our exposed position) not thunder and lightning. We pushed on up and over the pass, and down into the trees on the other side before stopping to eat. That was too long, and took a toll on me and Eldest Son.
Not  long after we finished lunch (under a fallen log--seriously!) and put up camp near one of the Little Five Lakes, the storms moved off and the sun broke through and dried all our gear (including my camera, which had developed an interesting tendency to take photos on its own). An evening walk gave us great light on the Kaweah Peaks across the Big Arroyo.
The third day was a slack day, moving camp only about 3 miles, to Big Five Lakes. We did laundry, napped, read, and came out eventually to make dinner.
An after-dinner walk produced nice light and reflections, which we were able to photograph between  slaps at voracious mosquitoes.
The fourth day we were back to covering the miles. Over the hill and down to Lost Canyon, then up the Canyon and over a divide to Columbine Lake.
Arrived at Columbine Lake just after lunch (we like to start early, hike steadily--and make camp early so we can nap). It doesn't look promising, but there are actually a number of nice campsites in the low area ahead of the hikers.
Fog moved in and out, so that we thought there would be no sunset. But the weather gods smiled on us, and we ended up with some of the most magical light I've experienced. The photos don't do it justice.
Gratuitous additional photos of the evening light. 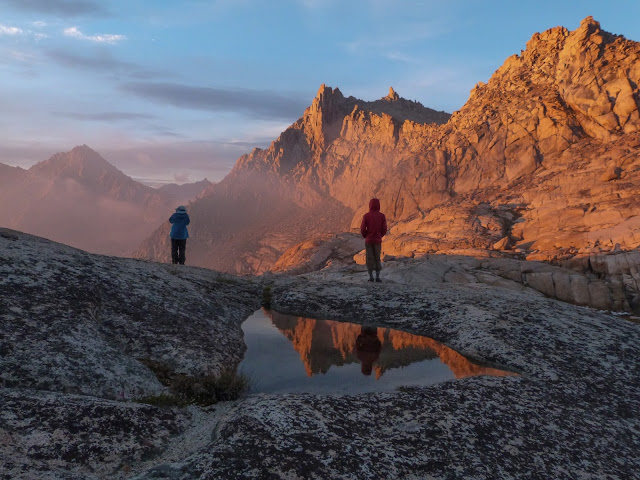 Fifth and final day: a short climb to Sawtooth Pass, and a long, painful descent (about 3000' down) to the car! The view from the top was spectacular, but I'll not deny my feet and knees were whimpering before we were done.
We experienced some rain nearly every day, mosquitoes were definitely worse than they are in August, but the scenery was world class, the kid carried more weight than I did (for the first time ever!), and it was great to see that we could still do significant mileage. 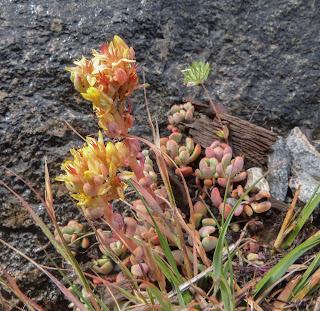