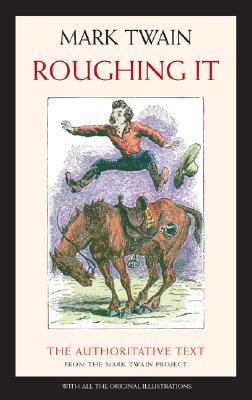 Title: Roughing It
Author: Mark Twain
Original Publication: 1872. I read a digital copy from the Gutenberg project without page numbers, but paperbacks seem to run around 500 pages.

Discussion:
This is a discussion, and not a review, because who the heck am I to review Mark Twain? Still, reading the book gave me a few thoughts, so you don't get off that easily. I'm just going to throw out a few things it made me think.

My first thought is that although this was fairly early Twain, you can tell. The tendency to stretch the truth, massage reality to fit his idea of humor, exaggerate just a tiny bit...it's all there. And there were a few places that made me laugh aloud.

My next thought is that Twain was more a man of his times than we would really like. It can be very uncomfortable to read what he has to say about persons of other races, particularly Native Americans. It made me want to smack him. I had to remind myself that he couldn't very well help absorbing the attitudes of essentially everyone around him. Then I skimmed quickly on to his next bit of personal misfortune, which was a lot more fun.

I also sort of envied Twain his leisurely 3-month exploration of the Hawaiian Islands, because I've only ever spent 9 days there, and seen only one island. Though at least I didn't have to do it on the back of a balky horse, which I do not envy him. And he didn't get to go snorkeling and see the amazing fish and corals.

Finally, I had to remind myself that when he began this 7-year adventure, he was all of 19 years old. That means he was still only 26 when he finished. No wonder he made bad decisions all along the way. And what was that older brother he left home with thinking, to give him no more guidance than that? (Except if I recall, the brother is maybe 2 years older. Not a lot of good judgement there, either). But a lot of his stupidity--and his prejudice--is more forgivable when you remember that he was just a kid.

Oh, and when he started a forest fire at Lake Tahoe? This resident of a drought-stricken and highly flammable California cringed, hard.

So, do I recommend this book? Not to everyone. It was an interesting look at the California, Nevada and Hawaii of the time, and there were some good laughs. But I never knew when his history was fiction, which is frustrating, and it took some perseverance to finish, so I'd say it's not for the faint of heart or for slow readers. And there's something in there to offend just about everyone. Proceed at your own risk.