I've been away, taking my Eldest Son off to college, so there haven't been any posts this week. Hope no one missed me too much! Since I haven't posted, I'll not wait for Friday, but post this right away.

I needed a story for this week, so for 900 words, I went to the random title generator and was given...


Janna had known them once. All their names, and where they grew. Now she wasn’t so sure. They were here, somewhere, and she recalled some of them. Maybe they would know her if she could find them. But that was absurd.

Someone planted us here. Once, we were tended, loved. Protected. It has been so long now since she came, though. We may be forgotten, but we have not forgotten her. We will never forget.

Janna walked with a limp now. When she had planted the flowers, she had been a little girl, and the trail into the woods had seemed short, something to run over lightly in a matter of minutes. That was before the accident. Janna didn’t remember much of the accident which had changed everything. She’d been in the back seat, asleep in her booster seat. Even at seven she was far too small to ride without one. Daddy was driving, she thought.

She’d woken at the moment of impact, and had a vague memory of noise and dizzying movement, and pain. Far too much pain. There had been light, too: flashing lights and sirens, and lights in her eyes from the pain, before the darkness returned. Then had come hospitals, and frightening sounds and smells and more bright lights, and people doing things to her. After that, there was a long, long time someplace where she had gone to learn to walk all over again, with one leg now shorter than the other and not very useful. She remembered more of that time.

Just at first she’d cried for her flowers, missing the garden she’d made. Janna remembered that now. But she had forgotten everything for a long time, after she understood. It had been hard at first, but at last she knew why her parents did not visit her. Things grew dark for a very long time.

With all that darkness in her heart and soul, for a long time Janna didn’t remember the flowers. She forgot them, as she tried so hard to forget everything else from Before. If she could forget the pain, she could forget the loneliness, and forget that other truth she never wanted to remember. The truth that had made her breathe a tiny sigh of relief when her father didn’t come.

They sent her away, and though Janna grew to love her aunt, she was never a little girl again. Pain and death could do that to a kid, she told herself. Others might look at her and see a child, a girl not even in her teens. But the Janna now limping along the path wasn’t a child anymore. She wasn’t even sure she was the same person as the joy-filled girl who had planted the flowers. She had worked hard to put that life behind her, the good lost in the effort to shed the bad.

So she had forgotten everything, right up until Aunt Bets got a new job and they moved back to where they’d come from. Back to where the accident had happened. And back to the woods she’d run to so often, starting when she was only five. The woods where she’d felt safe.

The woods where she’d planted the flowers.

She’d stolen them from a neighbor’s yard, she recalled. She’d dug them up one or two at a time, put them in Dixie cups, and carried them into the woods. There she had spent days digging up a plot with her little toy shovel, and planted the purloined blossoms. She’d carried water from a drainage ditch in her little pail, and made a garden where no one would see it but herself.

Janna reminded herself that after so many years, the flowers would be long dead, the forest moved back in, and her refuge lost. But she kept on, limping down the overgrown path.

Janna felt the path underfoot, startled to find it familiar, despite the years. It would be just around this corner…not that there would be anything left, she reminded herself. Flowers needed tending, and hope was a dangerous thing. She rounded the corner and came to a halt.

The forgotten flowerbed had not died of neglect. Some of the flowers had spread over the entire glade, and at this season, bloomed with an enthusiasm that shocked her. For a moment there was a flood of anger. Someone had found her garden and tended it, and it wasn’t hers anymore!

A closer look assured Janna that it was not so. There was no sign of digging or weeding, no sign any human had been here since she had last come. But she had done better than she knew, with the flowers she had taken. Left to themselves, they dug in roots, took hold, and found themselves in their own home. Not all, she could see when she looked more closely. But several kinds had belonged here, and remained.

With a cry of delight, forgetting the leg which pained her always and needed gentle care, Janna dropped to her knees at the edge of the glade and sobbed, so loudly that she never after was sure she had heard the voice. 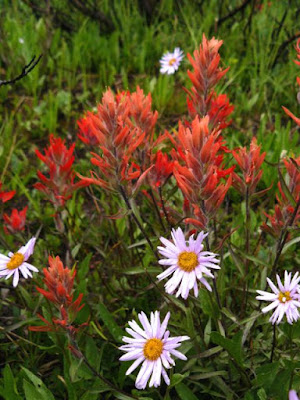