Back in June, en route from Colorado to Southern CA, we spent a couple of days at Mesa Verde National Park. That didn't give us a ton of time (it wasn't our first visit, so we didn't mind), but we had time enough to do a hike and take a tour of Balcony House. In between, we enjoyed an amazing sunset from the campground. I am assuming everyone knows that Mesa Verde is home to an amazing collection of Anasazi dwellings, and instead of my usual brief educational spiel, I'll refer you to the park web page for more info and cut to the photos.


The first evening we had just time to visit Spruce Tree House, one of the few you can do without a guided hike. I got a nice view back with no other tourists, because we were the last to be shooed out. We continued around the 3-mile Spruce Canyon trail, accompanied by rumbles of thunder.
Driving back to camp, we stopped at the Cedar Tree Tower (no cedars, either; just pinon and juniper), which stands on the edge of the mesa, and caught the light nicely.
Showers and sunset at the campground. 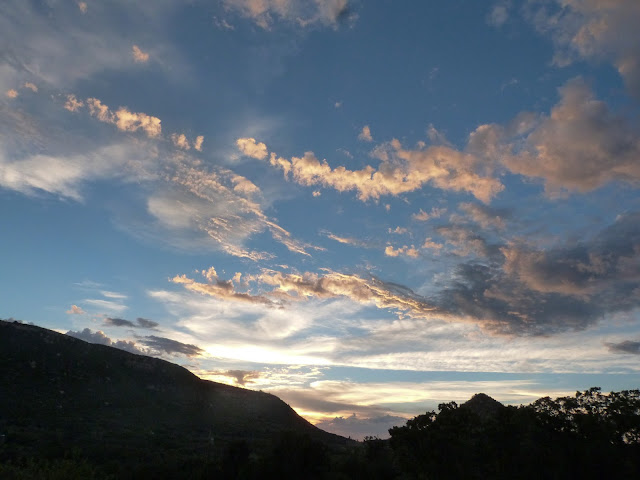 Next morning we had tickets for the 9 a.m. hike, so we were up early onto the mesa. For the record, the campground is about 18 miles from the Chapin Mesa tours, so this involved a fair bit of driving. We stopped en route to look over the edge at the Cliff Palace, which we have marked for a tour the next time we visit.
We also left ourselves time to walk a mile or so to the Soda Canyon overlook, for a perspective on Balcony House. Along the way, we spotted a surprising number of flowers, including this gilia (I'm not sure what sort).
It was cool to get a look at the setting and the whole picture of the place we were about to visit.

We joined our group and headed off to the ruins. The first bit is easy. Then you have to get into the house.
A couple of shots once we climbed and crawled our way in:


At the end of the tour, we left by the route the Anasazi used to come in and out. You can see that they walled up a gap in the rocks to force people to crawl through--arguing a certain need for security.
The Anasazi had some hand- and foot-holds carved in the rock. We were given a ladder and some railings.
From here, we were off across northern Arizona (see my post on Petrified Forest National Park).

Note on weather conditions: I often post about areas of the SW US that are desert. And we often visit those areas in summer, though they are at their best in spring, if not winter.  We make it work because that is when we are there. But in light of the tragic death of two French tourists last week at White Sands in New Mexico, I feel obliged to comment on how we do this. Primarily, we do very little outdoors between the hours of about 10 a.m. and 6 p.m. Mesa Verda is relatively high (the top of Chapin Mesa is 7000'), and afternoon thunderstorms can cool it quite a bit. But we still limit distances and carry plenty of water. When we must be out at midday (as at Petrified Forest), we do very short walks indeed. We were never out of sight of the car or Visitors Center there, and stayed out for maybe all of 15 minutes. These deserts are for real, and heat can kill!
Posted by Rebecca M. Douglass at 12:00 AM