Photo Friday: On to Zion

I've been working my way through our spring break travels in Death Valley, and now we move on to Zion National Park, where we went after a detour to the Las Vegas airport (Eldest Son needed to fly to Colorado for an event at the college he will be attending). We only had one full day there, but took full advantage of it.

After an evening trip back out to St. George to have an infected finger dealt with (there is a little clinic in Springdale, just outside the park, where an incredibly nice NP offers a great deal of help. In my case, her help was "That looks nasty. You should go down to the ER, because I am not equipped to deal with it."), we took an early start next morning for best conditions. Second Son left camp about 6:20 a.m. to climb Angel's Landing.  I rode my bike up the canyon to the Weeping Wall trailhead, and, with some help from my spouse, did a great hike.

Biking up the river in the morning not as early as I'd meant to be, the red walls, blue sky and green cottonwood trees are a striking combo.
Zion has a surprising amount of wildlife. Along the river, if you go early, you may see deer and wild turkeys, and birds of prey ride the thermals. And there are always the squirrel kin. (Admire them, and don't feed them!)
From the trailhead, I climbed up the Observation Point trail, some 3 1/2 miles up (and I do mean up) to a point offering stunning views of the Virgin River Canyon. The trails were, I believe, constructed by the CCC back when immense effort to blast out a ledge and build a trail were considered acceptable. Sometimes admiring the construction rates right up there with the views! "Who thought of putting a trail here?" you ask yourself. They wouldn't do it now, but I am glad they did it then.
Partway up the trail passes a bit of a slot canyon. Actually, the photo above also shows a slot, with the trail high above it. This time, the trail brought us to the base of the slot.
Eventually, I climbed up onto the canyon wall, with no more shady slots and nooks. But that doesn't prevent plants from growing where you wouldn't think they could.
Finally, I hit the top. On a point overlooking the canyon, I had views in nearly every direction. Well worth the climb, and the next time I do it, it will be in the early morning so that the light will be better.
Heading back down, I turned away from the crowds pouring up and down the Observation Point trail, and took a little-used trail on up toward the East Rim. For a time, it followed a valley, forested and unexpected.
It was a pretty long, hot climb to the rim, but, again, the views were rewarding. The last mile of the 8 or 9 mile hike was across the high desert flats, but before I left the canyon rim, I got a final view over the broken, eroded country that is Zion. 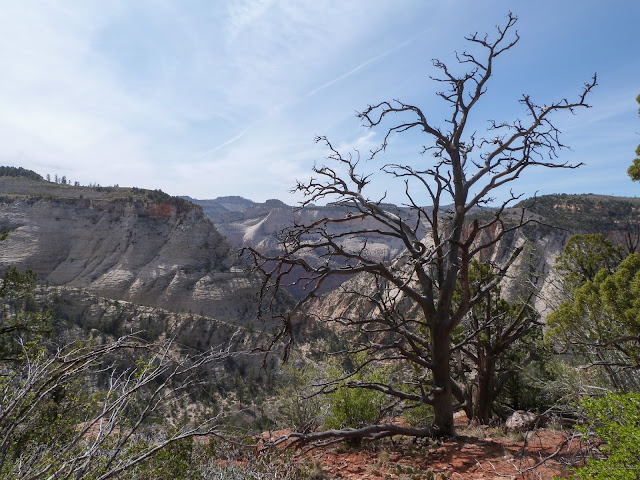