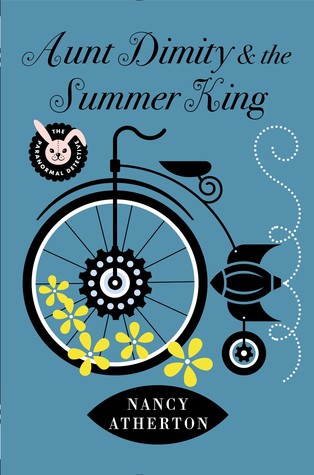 Publisher's Summary:
There’s trouble in Finch. Four recently sold cottages are standing empty, and the locals fear that a developer plans to turn their cozy village into an enclave of overpriced weekend homes. But for once Lori Shepherd can’t help.

Her infant daughter, her father-inlaw’s upcoming wedding, and the crushing prospect of her fortieth birthday have left her feeling inadequate and overwhelmed. Until, that is, she has a chance encounter with an eccentric inventor named Arthur Hargreaves. Dubbed the Summer King by his equally eccentric family, Arthur is as warmhearted as the summer sun. In his presence, Lori forgets her troubles—and Finch’s.

But Lori snaps out of her happy trance when she discovers detailed maps of Finch in the Summer King’s library. Next, a real estate agent comes knocking. Is Arthur secretly plotting Finch’s demise?

With Aunt Dimity’s otherworldly help—and her new daughter in her arms—Lori mounts a crusade to save her beloved village from the Summer King’s scorching greed.

My Review:
Since I think I've given the last couple of Aunt Dimity books lukewarm reviews, I thought it only fair to review this one so I can note that I think it's moved a bit more in the right direction. There has definitely been a turn away from any hint of violence or physical threats (as there were in a couple of the books back a few years, which made Aunt Dimity and the Deep Blue Sea one of the strongest in the series), but this was less saccharine than the Wishing Well or The Lost Prince.

The story builds a nice sense of a threat to the village of Finch, and Lori's usual trouble with jumping to conclusions, before she manages to stumble her way to the solution. I have to say that although I think this was better than the last two, I miss something that the early books had--maybe less of a sense of everything coming up kittens and sparkles. Maybe I just think that a mystery needs a little more real threat to give it a sense of urgency. In any case, the books remain nice little confections, a little too sweet and without much substance, but still a pleasure to nibble with your tea.

Recommendation:
For fans of the series, and those who like their books completely unthreatening.
Posted by Rebecca M. Douglass at 12:00 AM