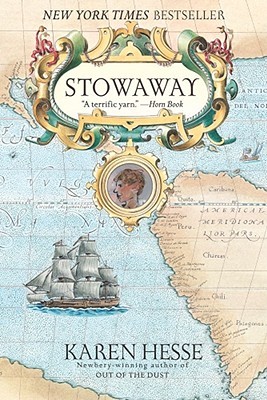 Publisher's Summary:
It is known that in the summer of 1768, Captain James Cook sailed from England on H.M.S Endeavour, beginning a three-year voyage around the world on a secret mission to discover an unknown continent at the bottom of the globe. What is less known is that a boy by the name of Nicholas Young was a stowaway on that ship.


My Review:
As an engaging means of introducing readers to the explorations of Captain Cook, this book is superb. As a story, it is at times a little thin, but that is more than compensated for by the fact that Cook's voyage around the world is an amazing story in itself. The story is presented as the diary of young Nick, who has stowed away to join the expedition (though without actually knowing what he was getting into).

The narration is beautifully done, though the character isn't entirely convincing as a 10-13 year old (the voyage was long!). Still, I liked the voice and the reading and pronunciations were good. My only reservation about the audio version is that I'm thinking maybe the print book has maps, and maps would be good to have (though a quick look at Amazon's "look inside" feature doesn't reveal any maps). Some places discussed use names we no longer use, so a map that shows both names would be a huge help!

I appreciated that the author used a real person who was aboard Cook's Endeavour as the main character for this book. A brief historical note at the end of the book tells us what was known of the real Nick, which is very little. Hesse created a backstory (revealed beautifully and tantalizingly in brief mentions in the diary, as a boy might actually do) and details of his daily life and friends, but I think every character and incident was real. As noted that puts certain constraints on the development of a story line, but is very good for making the voyage come to life for the reader.

Recommendation:
For anyone (of any age!) interested in Cook's voyages. I wouldn't it recommend for children under 10 or 11 due to a fair bit of death to deal with. Violence is minimally described, and Nick is refreshingly naive about sex, but things do get heavy.

Full Disclosure: I checked Stowaway out of my library, and received nothing from the writer or publisher in exchange for my honest review.  The opinions expressed are my own and those of no one else.  I am disclosing this in accordance with the Federal Trade Commission's 16 CFR, Part 255: "Guides Concerning the Use of Endorsements and Testimonials in Advertising."
Posted by Rebecca M. Douglass at 12:00 AM