Yes, it's summer and my posts are a little messed up with vacations. So I missed the last couple of Friday flash fiction posts, and now I'm writing a bit of non-fiction for a Monday! Bear with me, okay? In any case, the "flash" part of it is apropos. In 360 words:

Fear and Trembling in a Tent

It is midnight in the Sierra Nevada mountains, and suddenly we are not sleeping. The weather was pleasant when we went to bed, and two days of hard hiking made it easy to drop off. I wouldn’t have been surprised had I slept soundly all night.

Thor and Odin and the crew have a different idea. The first boom of thunder—if it was the first; it was the first I woke to hear—is loud and close. The flashes of lightning sear the retina even with the eyes closed. We count off the seconds between flash and boom. Do the math. Two miles. One. Half a mile. A quarter. Then: holy shit it’s in the tent!

It isn’t. The mind knows that, because the mind is still there to think about it. But when the gap between lightning and thunder drops to near zero, and the ground shakes with the booming air, the mind is given very little say in my reactions. The gut takes over.

I am not scared of thunder. We are camped below tree line, well back from the lake and not atop anything, in the trees but not near a particularly tall tree. Even with the storm right atop us we are reasonably safe. As a general rule, I like thunderstorms.

And yet. My gut is haunted by the memory of a friend who died under a fallen tree, asleep—we can only hope—in his hammock. This isn’t at all the same thing; the wind is oddly light, though the same can’t be said of the rain. Some of it might be hail, but I’m not looking out to see. And if a tree has my name on it…there is nothing to be done now.

The storm is moving away. Because we are among big peaks and big canyons, the thunder continues to echo ominously even as it moves on. Eventually I drift off again, when the flashes no longer burn my vision.

Every time I wake up to roll over or adjust my sleeping bag, I can hear thunder, however distant. The storms go on all night, but I sleep anyway. 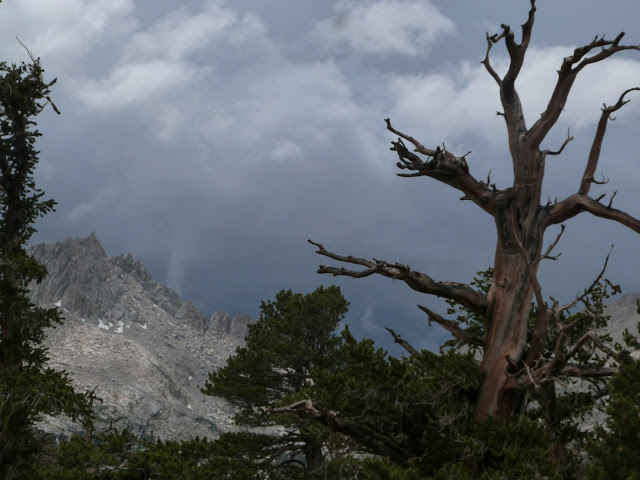