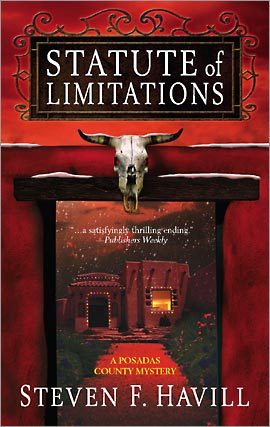 Summary:
It's Christmas in Posadas, New Mexico, and all hell is breaking loose. The former town police chief suffers a heart attack Christmas Eve under dubious circumstances, the Sheriff has a pulmonary embolism Christmas morning, and in the afternoon there's a murder and then an attack on retired undersheriff Bill Gastner. Undersheriff Estelle Reyes-Guzman has her hands more than full, sorting out all the threads, keeping up with the medical reports, and occasionally racing home to deal with her two young sons.

Review:
As usual, Havill has created a tight, fast-paced police procedural (with some elements of the cozy. It's not particularly light, but is fairly character-driven with a great village setting, and no excessive grimness). My main criticism of the plot is that the subplot surrounding Estelle's home life and issues with her oldest son gets pretty much dropped in the end. I'm sure it turns up in the next book, but the thread ends up feeling like an unnecessary distraction. Aside from that relatively minor complaint, the plot is tight and holds together very well.

The audio-book narrator, on the other hand, drove me to distraction. By the 10th time she pronounced hijo as "hee-oh," I was ready to scream, if not to do actual violence. If I'd been able to get my hands on the print version right then, I would have switched, because the consistent mangling of Spanish words in a book laced with them really got old fast. Aside from that there was nothing intrinsically wrong with her narration (though I didn't like her voicing of Gastner), but it certainly wasn't one of those that struck me as perfect, either. I would have to say that I don't recommend the audio version.

Recommendation:
This is a great series (Posadas County mysteries continue the Undersheriff Bill Gastner mysteries), and I recommend reading them in order, starting clear back with Bill Gastner's first appearance in Heartshot. They have a certain level of tension and violence, but nothing excessive, and always strictly as needed for the story. I do not recommend the audio book.

Full Disclosure: I checked Statute of Limitations out of my library, and received nothing from the writer or publisher in exchange for my honest review.  The opinions expressed are my own and those of no one else.  I am disclosing this in accordance with the Federal Trade Commission's 16 CFR, Part 255: "Guides Concerning the Use of Endorsements and Testimonials in Advertising."
Posted by Rebecca M. Douglass at 2:20 PM