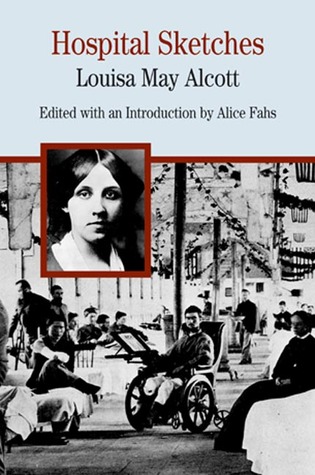 Summary:
During the winter of 1862-3, Louisa May Alcott, burning to do something useful in the war effort, traveled to Washington D.C. and took a job as a nurse in a military hospital. With no real training or experience, Alcott learned a lot in a hurry, including just how miserable a job of treating the wounded men the army was doing. The fictionalized account of the 3 months she worked before becoming too ill to continue was the book that finally gave her the "big break" all authors seek.

Review:
Written with Alcott's usual wit and hyperbole, not to mention sentiment, the Sketches make for easy reading, and offer in a very small package a great deal of insight into not only the conditions of military hospitals  (a new idea largely developed during the Civil War) but also society in general. Alcott was a rabid abolitionist, and you can see in her more known works (Little Women, Little Men and Jo's Boys in particular, I think) both her desire for a non-racist society and the deeply ingrained racism that prevented even the most "advanced" thinkers from truly putting the recently-freed slaves on an even footing.

Ms. Fahs' Introduction and notes set the scene quite well and clarify the many cultural and literary references that Alcott throws about with abandon (sometimes a bit too minutely for my taste, but helpful for many, especially those less into history and literature than I am).

In Tribulation Periwinkle, the character Alcott invents to stand in her place in these narratives, you can definitely see the roots of Jo March as well as the restlessness and ambition of the author herself. And the style, mixing humor and (as noted) sentiment verging on the maudlin (a weakness of the period, I fear), is equally familiar.

Recommendation:
I found this little book (the actual Sketches are only about 70 pages) a fascinating read for both the historical value and for the look into Alcott's developing art (for more on that, look up her first novel, The Inheritance, which was only published in 1997, or the Gothic A Long, Fatal Love Chase, serialized under a pseudonym right after the Civil War). Anyone interested in either the Civil War or Alcott will want to take a look at this book.

Full Disclosure: I bought Hospital Sketches, and should scarcely need to note that I received nothing from the writer or publisher in exchange for my honest review.  The opinions expressed are my own and those of no one else.  I am disclosing this in accordance with the Federal Trade Commission's 16 CFR, Part 255: "Guides Concerning the Use of Endorsements and Testimonials in Advertising."
Posted by Rebecca M. Douglass at 12:00 AM