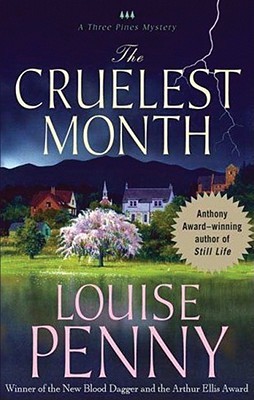 Summary:
In this third book featuring Chief Inspector Armand Gamache (of the Surete de Quebec), we are back in Three Pines, where a resident has dropped dead--apparently of fright--during a seance in a house locally believed to be cursed. Not everyone is convinced it's quite that simple, however, and Gamache must figure out what really happened, all  while dealing with his own problems back at the Surete.

Review:
This series falls somewhere between cozy and police procedural, and the books are very well written. Aside from the minor necessity of suspended disbelief regarding the number of murders in the idyllic town of Three Pines as we work our way through the series, each book so far has been a well-crafted and highly believable mystery, with fully-developed characters.

Though I struggled a bit with this story, it was not because of any problem with the writing. On the contrary, it was because it was so well written.  The sense of doom that had been gathering about Gamache through the first books became very thick in this one, and there were a lot of betrayals to deal with, and I was forced to decide that I don't like betrayal. The author doesn't leave the reader in much doubt about what's going on, though Gamache takes longer, not being privy to everything we see. That was what made it so hard for me--trying to will him to see through certain people.

Because Penny doesn't shy away from the darker side of even good people, the village of Three Pines is both more real than most mystery settings, and a little less comfortable than I want it to be. I suspect that is brilliant writing, though if all the books are this intense, I'll have to pick and choose when I want to read them.

The audio was incredibly well done, and I found the reader's voicing of characters to be clear and distinctive. He handled the accents and the French words and phrases very well, a fact I appreciated the more as I'm currently listening with some cringing to a book in which the narrator is mangling the Spanish.

Recommended for:
Those who like a superbly crafted and well-written mystery, and are okay with some suspense of a more psychological than physical sort, and a little frustration with injustice.

Full Disclosure: I checked The Cruelest Month out of my (digital) library, and received nothing from the writer or publisher in exchange for my honest review.  The opinions expressed are my own and those of no one else.  I am disclosing this in accordance with the Federal Trade Commission's 16 CFR, Part 255: "Guides Concerning the Use of Endorsements and Testimonials in Advertising."