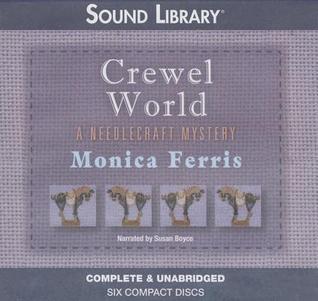 Summary:
When Betsy Devonshire has nowhere else to go, she goes to her family. In this case, to her sister Margot, living in Excelsior, Minnesota. It's an idyllic little town and a good place to recover from a nasty divorce, right up until Margot is murdered and her craft shop is tossed. After that, Betsy can't rest until she finds out who killed her sister, and she doesn't trust the police to find the killer.

Review:
My Mom recommended this mystery, so eventually I wandered off and borrowed a copy from the digital library. I wasn't surprised to find I enjoyed it a great deal, given that Mom knows me pretty well. I was, however, a bit more surprised at my enjoyment of the book when I considered a number of things that should have made me less engaged in the story.

For one thing, I'm not at all into handicrafts. I own a mitre saw and a cordless drill (and know how to use them), not an embroidery hoop and a stock of thread, and while Mom managed to teach me the rudiments of crochet, we gave up on the whole knitting thing. Happily, that doesn't matter with this book. In fact, Betsy isn't much into needlecraft, at least at the start, though she does take to it better than I might.

Another thing that surprised me was that I solved the mystery well before Betsy did. This was partly due to the author giving us some insight into the killer's mind (not any kind of confession, but enough to give a hint), and I am not sure I think that's a good idea. But let's just say I recognized the murder weapon the first time I saw it, partly because...well, the same weapon has shown up in at least one other mystery I've read. Again, this should have put me off the book, but by that time Ferris had already done what I most ask of a cozy mystery--drawn me into the lives of the characters.

There are some dubious sorts in Excelsior, and some are more likeable than others, but in general, the key players are people with whom I can empathize. They feel real enough--everyone has flaws, but they are mostly just ordinary people being as good as they can be. I also appreciated that the sleuth isn't some sweet young thing. She's my age (though I flatter myself I have my head a bit more together than she does). It's refreshing to have a female main character who is in her 50s.

The mystery, though I managed to solve it, held together very well. I'd rather solve the mystery in advance of the sleuth than end up feeling like there was some gigantic leap that I just have to accept. This one held together very well, and the police might even have a case when it's all done. Finally, the book is very well read by Susan Boyce, which always adds to the pleasure.

Recommendation:
For fans of the cozy mystery, especially but not limited to those who like crafts. A bonus for those of us no longer young who like a character once in a while who looks like us.

Full Disclosure: I checked Crewel World out of my library, and received nothing from the writer or publisher in exchange for my honest review.  The opinions expressed are my own and those of no one else.  I am disclosing this in accordance with the Federal Trade Commission's 16 CFR, Part 255: "Guides Concerning the Use of Endorsements and Testimonials in Advertising."
Posted by Rebecca M. Douglass at 12:00 AM