A few weeks ago I started a report on our Spring Break trip to Death Valley and other cool (warm) places with a bit on the Eureka Dunes. Time to move on to DV proper for the second installment!

To get from the Eureka Dunes to Furnace Creek, you have two choices. You can (after driving the excruciatingly rough 10 miles back to the "main" road) turn right, and drive roughly 50 miles of decent, but still washboardy, dirt to Scotty's Castle, then the 50 miles or so of pavement on south to Furnace Creek. Or you can do what we did: turn left and backtrack to Bishop, take US 395 south to Lone Pine, and then follow the main road past Owens Lake and over the Inyo Mountains, down past Panamint Springs (a spectacular bit of road, and well worth the drive), up over Towne Pass (at about 5000') and down down down to Stovepipe Wells at 5' above sealevel, then around the corner...it was getting late, the wind was fierce, and the Death Valley Dunes were in the process of relocating themselves.
On around the corner and down to Furnace Creek (178' below sea level), where we were lucky to get one of the last campsites available (word to the wise: when traveling the Parks of the SW at Spring Break, campground reservations are a good idea).

Next day, being thwarted in our desire to rent a jeep (see note about reservations), we went for a hike in the deservedly popular Mosaic Canyon, back around by Stovepipe Wells (another word to the wise: starting early for such hikes not only beats the heat, but the crowds. We were so-so about start time, but at 10ish there was still parking. When we emerged around 1, no way).

Mosaic Canyon is named for the breccia, a layer of conglomerate sandwiched between marble layers. 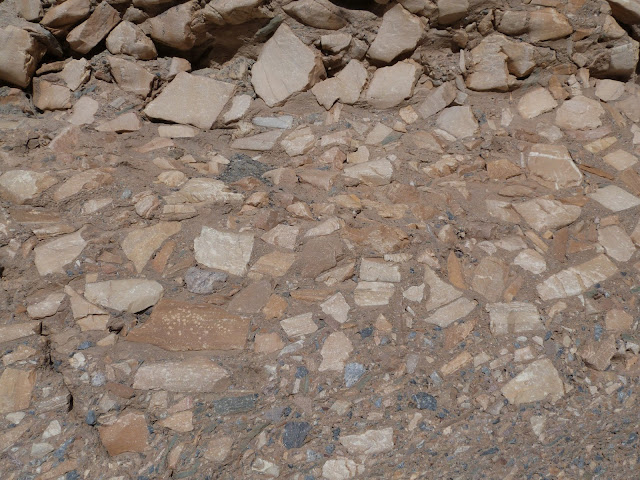 The marble is well polished by flood waters (which periodically re-lay the canyon floor--it's no place to be in a cloud-burst!).
Periodic chock-stones and waterfalls (dry) to scramble up or around kept the interest of the younger crowd, though my husband's parents turned back. The first maybe 1/2 to 3/4 of a mile is very doable, with a hand up for the less nimble; beyond that you need to be willing to put yourself out a bit. Don't feel bad if you can't go on: in the First Narrows, you get to see the mosaics, the best marble, and then (in the open space above the Narrows), some flowers.
The Second Narrows ended in an 18-foot fall, but it was rough and sloped enough to make the climb kind of fun. There's a by-pass for the less insane, and for the return trip (a 3rd word to the wise: climbing up is always easier than climbing down).

The hike ended for Second Son and for me at the Third Narrows, with this unclimbable falls (well, it can be climbed, but only with gear and skill). The Spouse and Eldest Son found a by-pass that we didn't like, so we began the amble back to lunch, giving us a nice head start on the other two.
The entire hike was probably only about 3 hours, but with bits to explore and climb and photograph, it took us about 2 1/2 hours. It was hot by then, so we refreshed ourselves with ice cream at Stovepipe Wells, and a drive up past Wildrose Campground (4100') until we found flowers, and storm clouds. It wasn't a good year for flowers--there was some rain about the right time, but the spring was too hot. Higher up, though, there were places with flowers, if you were willing to look. 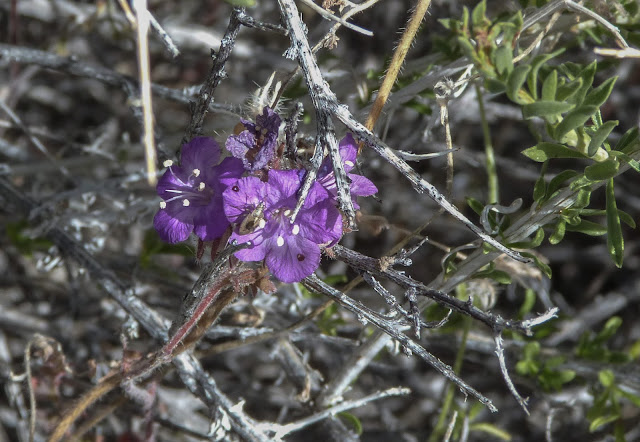