Audiobook Review: Dancing at the Rascal Fair, by Ivan Doig 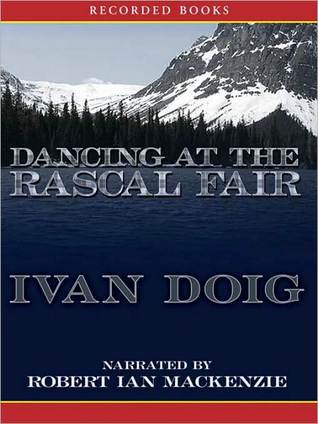 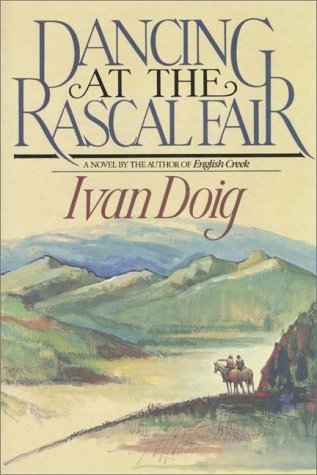 I've included both the audiobook cover (which I didn't ever see, because I was listening to it!) and the original hardback cover, which is what we have on our shelf.

Title: Dancing at the Rascal Fair
Author:  Ivan Doig; narrated by Robert Ian MacKenzie
Publisher: Originally published by Atheneum in 1987 (384 pages). Audio book published by Recorded Books, Inc., in 2010.
Source: Library. I also own a copy of the hardback, which I read back along about 1996.

Summary:
First, I want to note that although this was the second book Doig wrote about the McCaskill family it is chronologically the first. He created the family in English Creek in 1984, his first novel set in the Gros Ventre area (the land Doig wrote about most often and refers to as "The Two Medicine country" after the river that runs through it), but went back a generation with Dancing at the Rascal Fair to explore how the family got there.


In 1889, Rob Barclay and Angus McCaskill leave Scotland, a pair of single young men in search of a new life in a new country--the mythical land of Montana where Rob's uncle Lucas lives.They are all of 19 years old, and in  Angus's words, "green as the cheese of the moon." Despite their blind naivete, they survive, locate Lucas, and homestead the north fork of English Creek.  Angus tells us of their lives for the next 30 years, as they grow older and grow families in "Scotch Heaven." As a narrator Angus is insightful and witty, at times addressing Rob or others in second person, at others narrating in a more conventional first-person voice, and always with Doig's inimitable language, visual and imaginative and with a touch of humor.

The story is by no means all joy, just as life never is. This is an adult novel in the best sense of the word, with love, loss, and deep feelings running all directions. And every word of it is amazing.

Robert Ian MacKenzie's narration in a lovely Scots voice adds a crowning touch to the story, and lured me on to sit and listen when I should have been doing other things!

As with virtually everything Doig has written, I give this an enthusiastic five stars, two thumbs up, and a cheer, as well as a few tears (because that's life). Long may Doig write.


###
Full Disclosure: I checked Dancing at the Rascal Fair out of my library, and received nothing from the writer or publisher in exchange for my honest review.  The opinions expressed are my own and those of no one else.  I am disclosing this in accordance with the Federal Trade Commission's 16 CFR, Part 255: "Guides Concerning the Use of Endorsements and Testimonials in Advertising."

Absurd though it feels to mention my work on the same page as Doig's, I'll still encourage you to enter the drawing for a free electronic copy of my newest book, Halitor the Hero.