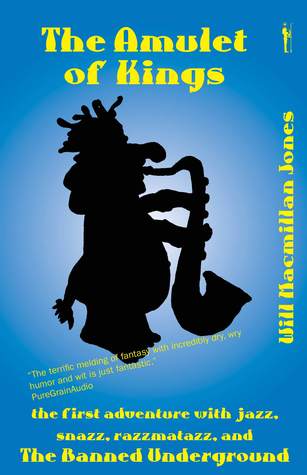 Title: Amulet of Kings
Author: Will Macmillan Jones
Publisher: Safkhet Fantasy, 2011, 176 pages.
Source: I'm not sure, but I think I bought this. Or picked the ebook up on a free day, or something.

Summary:
This isn't an easy book to summarize. So I'll crib from the publisher's blurb:
What could be worse? Having to take a holiday in the (rainy) Lake District in the Northwest of England, with an aunt who turns people into frogs for a hobby? Or battling the local Dark Lord, whose attempt at world domination starts with the nearby underground Dwarf Mansion, and its enormous collection of used pizza boxes? Or getting involved with a jazz-loving bog troll and his dwarven Rhythm and Blues band? Or is it being miles from a McDonalds? The teenagers find out as they fall into a Mad, Mad World, so close to our own that you can't tell the difference.

Review:
Okay, I was predisposed to like this. I mean, not only has the writer made a lot of good contributions to Goodreads groups in which I participate, but what's not to love about trolls who play jazz and dwarves with housekeeping issues? Or surly teens...no, strike that. Plenty not to love about surly teens. But when they are someone else's problem, and in the hands of a writer like Will Macmillan Jones, even surly teens have their good side.

I didn't quite know what to expect when I picked this up, and what I found was both a fun fantasy with tongue firmly planted in cheek, and a commentary on society. Also a fair bit of humour, and I spelled it that way on purpose. I'm pretty sure that despite my life-long immersion in British novels, I missed a fair number of jokes. But that's okay, because the book has more than enough to go around, so that the US contingent needn't feel shorted.

In fact, the Banned Underground series is off to a good start as a bit of light humour, more than as serious fantasy. Those looking for serious fantasy, for a reprisal of Lord of the Rings with all grimness in place, should look elsewhere. Occasionally, the balance between the heroic fantasy story (yeah, there is one, really) and the absurdity tipped a bit too far one way or the other. But I never lost interest, and the story never dragged. I will definitely keep reading this series.

Recommendation:
For those who like fantasy, but aren't all serious about it, and for those who like British humour. If you didn't like Monty Python, you might want to go elsewhere. Oh, and liking jazz isn't a requirement, though a little familiarity with musicians probably enriches the experience.

Full Disclosure: I bought, borrowed or stole Amulet of Kings all on my own, and received nothing from the writer or publisher in exchange for my honest review.  The opinions expressed are my own and those of no one else.  I am disclosing this in accordance with the Federal Trade Commission's 16 CFR, Part 255: "Guides Concerning the Use of Endorsements and Testimonials in Advertising."

P.S. Have a great Christmas, if that is your holiday of choice! I probably won't be back to post until Friday. Unless I change my mind. And, come to think of it, I'll probably post another "deja vu" post on Friday, too, because I don't have a new holiday story!