Bet you thought I wouldn't get my Wednesday review out!

Today's book is another entry in a really solid series, the "Dear America Diaries," historical fiction presented as the diaries of young girls living through significant events and periods. I want to say that I do like the look and feel of the hardback editions of these books which are carried by our library. The covers carry an image meant to be the girl in question, superimposed on a historical photo. The size is that of many diaries, and feels just right in the hand! 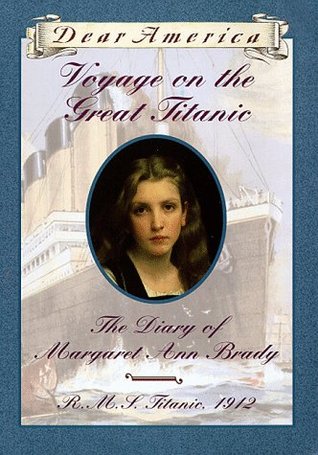 Summary:
Margaret Ann Brady, age 13, is living in an orphanage in London and dreaming of the day when her older brother will earn enough to bring her to America to join him. She gets her lucky chance when she is selected as companion for a wealthy American woman who must cross the Atlantic without her husband and doesn't wish to do so alone. Their crossing will be the maiden voyage of the biggest liner ever, the RMS Titanic.

Review:
The first thing to strike me about this book (and it's not a criticism, just an observation given the series) is that it is really an English story, not an American one.  Margaret is of Irish descent and London upbringing, and while she is eager to get to America, she is also a keen and at times critical observer of her American patroness and her friends. But she is a sympathetic and engaging narrator as well, and the reader will root for her to find her brother and root herself into the American life.

The premise felt a little strained--I had trouble believing that a woman of that class would look for a companion both so young and so lower-class (though the nuns have done their best to give Margaret good manners and educated speech, she is clearly a poor orphan girl). Sadly, it is entirely believable that in 1912 a child would simply be turned over to a random adult with few or no formalities.

In Margaret's case, this is a temporary arrangement that gets her what she really needs, and if her employer is a bit clueless (to put it kindly!), she does get the girl to America. Of course, the focus of the story is the Titanic. First there is the intriguing perspective of a poor girl riding first class--feeling like an imposter but also unashamedly enjoying the luxury. Then there is the disaster, a narrow escape from the sinking ship, and the horror of the hundreds of people freezing and drowning through that night. If Margaret expresses this with a sophistication well beyond her 13 years, we can forgive the author for the sake of the immediacy she brings to that event.

Like all the "Dear America" books, the story is followed by an epilogue that summarizes the life stories of the key characters and a historical overview of the times and, in this case, an examination of the Titanic, with loads of pictures.

Recommendation:
Voyage on the Great Titanic is a worthy addition to the series, and can be enjoyed by anyone with an interest in that disaster (dare I say even by boys?). As always, I appreciated the historical background and found the book a pleasant way to pick up a few more details about the period.

Full Disclosure: I checked Voyage on the Great Titanic out of my library, and received nothing from the writer or publisher in exchange for my honest review.  The opinions expressed are my own and those of no one else.  I am disclosing this in accordance with the Federal Trade Commission's 16 CFR, Part 255: "Guides Concerning the Use of Endorsements and Testimonials in Advertising."

Read Tuesday isn't over--deals on many books, including mine, continue through the end of the week.

Nor is my Giveaway over! Enter now to win an ebook of Halitor the Hero!
a Rafflecopter giveaway
Posted by Rebecca M. Douglass at 8:55 AM