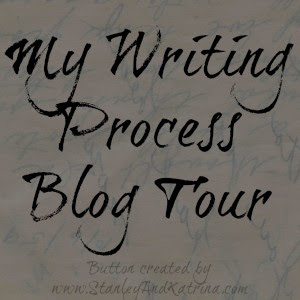 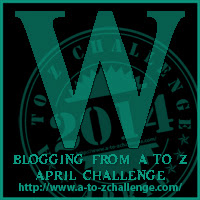 I was going to put this off to next week, but I realized that I needed a post about writing for Saturday. . . a post on the letter W.  Sounds like a good fit!

Last week blogger and writer of great stories for all ages, Jemima Pett, tagged me in the "My Writing Process" blog tour. My mission: to answer three questions about my writing process, and to tag three other writers.

1.  What am I working on?
Too many things!  I am working on edits for a middle grade fantasy, a humorous take on the genre which I hope I will be able to send to beta readers in a week or so.  I'm also writing a bit here and there on a third Ninja Librarian book, focusing more on young Peggy Rossiter, Big Al's math prodigy student.  Then there's Death By Trombone, the second Pismawallops PTA mystery, which I drafted back in November and am itching to get my hands on.  Several other projects (like a short-story collection) are also running around in my head and have to be firmly stuffed back into a dark room to keep them from sprouting too fast (can I mix the metaphor any more, if I really, really try?).

2.  Why do I write what I do?
Ideas come in and demand to be developed.  Or characters.  Halitor the Hero (the tongue-in-cheek fantasy up next) was sparked by a bit of flash fiction that I wrote.  In that story, a hero was aging and at the end of his career, but it made me wonder how he got there.  What I found when I took him back to his teens was a very different person!  Maybe not even the same character.  I write the stories and characters that come to me, but I write it all with humor because I can't write any other way (not an have it be anything anyone would want to read).

3.  How does my writing process work?
Well, it's evolving.  And maybe, as Facebook has it, it's complicated.  I have mostly in the past had a spark of an idea, or a character (on reflection, the character has usually come first), and just jumped in and started writing.  I've mostly known what genre I'm working in (though the jury is still out about genre re: the Ninja Librarian), but not where the story is going to go or how it'll get there.  With Death By Trombone, because I wanted to write it as a NaNo project and because I wanted to make editing it less of a gargantuan task than usual, I created an outline.  Sort of.  It definitely made writing easier, since when I ran into trouble I could look and see where I thought I was going.  It remains to be seen if it makes revising easier.  With luck, I start on that in a couple of weeks.


Now for the two writers I want to tag, to post about their own writing processes in the next week or two or so (it was supposed to be three, but hey, I put off asking until a little late. . . ):

Dixie Dawn Miller Goode has written a series of books about a boy named Duffy Barkley, who may have Cerebral Palsy but still  has no end of adventures; and a historical fiction with a touch of time travel, Double Time on the Oregon Trail.

And last but definitely not least, Gus Sanchez blogs irreverently at Out Where the Buses Don't Run, and is working on his first novel.  Right, Gus?

Check them out--go ahead and follow their blogs and see what they come up with.  I'm not sure I could come up with two more different writers, so maybe that can count for three.
Posted by Rebecca M. Douglass at 12:30 AM