P is for Pete the Peak-Bagging Pika

This week, Chuck just gave us an opening-line challenge, with the intent that we pick one and write a story next week.  Of course, I could have been clever and used one line this week and one next week, but instead I decided to make a story that really fit my theme and my letter!  So, in 807 words, I bring you:


Pika Pete wasn't like the other pikas.  Oh, they all liked the rocky talus slopes high up on the mountains.  But for most of them it was enough to find a burrow near an alpine meadow where they could harvest their winter provisions and watch the seasons change from the front porch.  Pete was different.

Pete would sit on his front porch and, instead of looking down over the meadow and thinking about eating grass and harvesting stalks of delicious flowers, and preparing for winter, he would look up at the high peaks and dream about climbing them.  He already had the top apartment in the talus, so high he harvested the columbine and sky pilot that grew among the rocks, or climbed to the next meadow, rather than joining his neighbors down below.  Yet he still wanted to go higher.

"I don't know why," Pete told his neighbor, Pika Paul.  "I just do.  I want to climb to where I can see in every direction at once.  The rock pile is so confining."

"The rock pile is safe," said Paul.  "If you can see in all directions, you're hawk-bait.  A pika needs a tunnel at his back."

Pete knew that.  But he could see that even the tops of mountains had rocks.  So surely he could find shelter at need, however high he went.

One day Pete decided to stop thinking about climbing the mountain and start actually climbing.  It was summer, so there were plants everywhere he could eat on the way.  He'd gathered an extra-large pile of stems and leaves the day before, and they were carefully laid out on his porch to dry for the winter.  He could afford a day or two for adventure.

With a cheery “eep-eep” to his neighbors, Pete started climbing.  It was easy as long as he was on the talus.  Pikas are very good at running over rocks, almost as though gravity was only for lesser, two-legged creatures.

At the top of the rocks was another meadow.  Pete paused, scanned earth and sky for danger, and dashed to the other side.  He then snuck back out for a mouthful or two of grass.  That was one danger passed, and a good time for a snack!  Then he was off, climbing through a new jumble of rocks.

Pete repeated this process for hours.  Sometimes the bare patches were larger or smaller, the plants swaying columbines or tiny mat plants, but he kept going, aside from pauses to nibble when he got hungry.  Gradually the rocks grew smaller and the bare patches barer. The slope was very steep and sometimes slippery with gravel.  Pete got tired.  Pikas are tough alpine animals, but they are used to running in short bursts, not trotting uphill all day.

At last Pete realized that he wouldn’t be able to finish his climb in a single day.  The “summit” he had seen from his porch was only a ridge on the way up, and the top of the mountain was much higher and farther off than he’d imagined.

A bit of a search found some cubbies under the rocks.  Pete rejected a couple of them because they smelled of other animals, or things he wasn’t sure of.  But not many things lived so high, and soon he found a snug hole, dragged in a few sprigs of phlox, and settled down for a good rest.  Pete found he could sleep anywhere, as long as it was under a rock.

In the morning, Pete went on.  An hour or so later, he nearly gave up.  A big field of snow blocked his way.  Snow!  In mid-summer!  As a pika he of course knew all about snow.  He spent long winters hiding from the snow, snug in his den with his provisions all around him providing insulation as well as dinner.  In the spring he and his fellow pikas had to deal with snow as provisions ran low, though they worked around it as much as possible.  But to meet snow now!  A pika was too easily seen against the white.  Crossing a snowfield was both cold and dangerous.

A little exploration, however, showed Pete a way around the snow, and he scuttled along, considering the idea that there might be places up here where the snow never did leave.  It was a strange thought.

Shortly after noon, Pete reached the summit.  A big pile of rocks gave him a safe approach and a cozy place to rest.  After a good look around for hawks and eagles, he stood for a minute on the very highest boulder, turning to look in all directions.

Everywhere he looked he saw another mountain.

When Pete started back down from his first summit, he had a lot to think about.

He went down the far side. 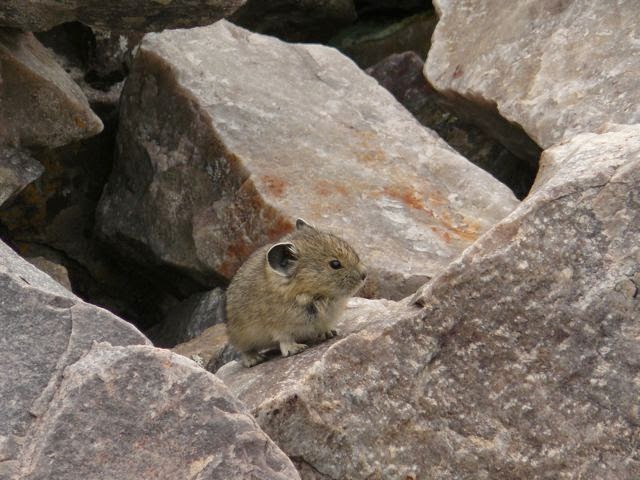 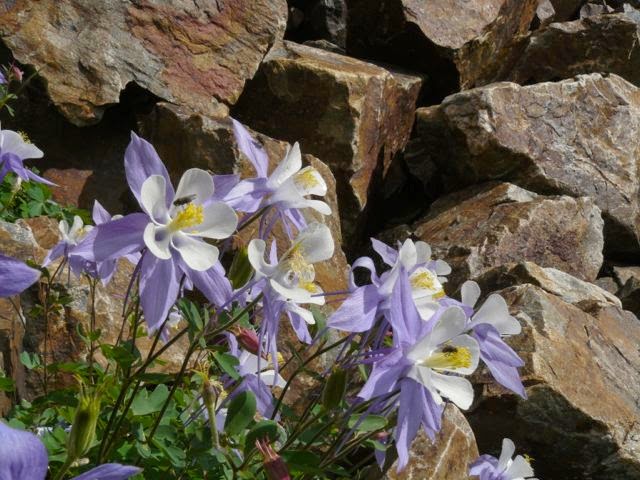