I could have made this about Oregon's Crater Lake National Park, of course.  Or the Oregon Coast, or Olympic National Park, where I did some memorable hikes in the 1980s.  But I want to highlight the John Day Fossil Beds National Monument (even if it's not as good a fit for the letter) because until recently I didn't even know they were there.

We stopped for just a few hours last summer on our drive from the Canadian Rockies back to California, and even in the middle of the day (truly a rotten time for photography) they were spectacular.  Not only were the museum and Visitor's Center great, but the geology and paleontology--wow!  Take a quick tour.

There are four or five small sections in the National Monument, and we visited only two, though perhaps the two main sections.  First was the Sheep Rock Unit, where the museum etc. are, as well as some of the fossil-bearing formations. 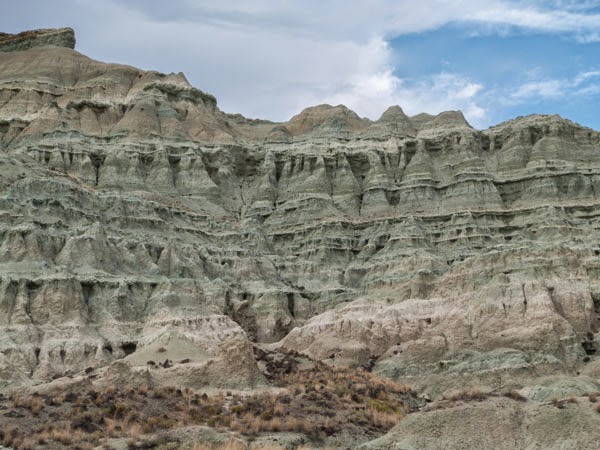 Our second stop was the Painted Hills Unit.  Wonder how it got that name, huh?
There were lots of signs asking people not to go walk on the hills.  Some morons did anyway, and it is clear that the footprints stay for a long time.  Not cool.  These hills were farther from the road so fairly untouched.

And there it is--if you are ever traveling through eastern Oregon, make the time to stop and look.  Granted, US Route 26 through John Day, though a "main" road from Bend to the Idaho border, isn't really an obvious route.  But sometimes it's worth going out of your way to see something most people never will.
Posted by Rebecca M. Douglass at 12:30 AM