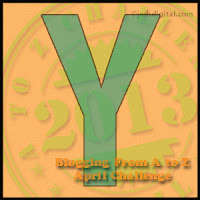 Unlike my recent Mystery Monday posts, this is an actual review of a book I read over the weekend.  I couldn't think of a single author or book that would fit the "Y" requirement, so I went and searched the mystery shelves at the library.  Richard Yancey is what I came up with, and as we had only the second book in the series, that's what I read.

The Highly Effective Detective is touted on the back cover as being something like Donald Westlake, and I can see the basis for the comparison.  Humor is definitely part of the story--as is the incompetence of the protagonist.  Teddy Ruzak is the Highly Effective Detective--except that when the story opens he's being shut down because he has once again failed the state licensing exam.  He's been calling himself an "investigative consultant" rather than a PI, but the state doesn't seem to think that's good enough.  They want him closed down, and now.  But when he turns around and finds a body in the alley behind his office, Ruzak can't stop investigating, license or no.  That's okay, because no one is paying him.

Like Sam Spade or Guy Noir, Teddy Ruzak is a loner.  Unlike the true hard-boiled detective, that seems to be more a failure than a choice.  While Ruzak forges on toward a solution to the crime (more by blind stubbornness than any great insight), he contemplates life, women, and God.  What?  Although the contemplation of God seems to be in part sparked reasonably enough by the mysterious letters of religious significance associated with the corpse, I found the thread to be a little disturbing and out of character with the general tone of the book.

The dog of the title is a rescue from the pound, and given the importance implied by the titling, I kept waiting for him to play a more significant role.  He's fine, he's just not that important.  I wondered at times if it was just an add-on to allow for a fun title.

In fact, I have been unable to completely decide if I like the book or not.  The mystery is fine, Teddy and his troubled relationships are entertaining, but there is a persistent religious theme running throughout that I could live without.  It's not that the author is blatantly preaching.  Often, it's hard to tell what he really thinks--Ruzak is the narrator, and he clearly doesn't know what to think.   Despite this there is at times a preachy feel to the contemplation of God, which doesn't do much for me.  To balance that, however, there is the more purely existential question he faces, because his ancient friend Eunice believes that he is a character in the book she is writing, which may have started as a memoir but has become a work of fiction.  I thought the subplot with Eunice was probably the best part of the book.

Overall, I give the book 3.5 stars.  The writing was entertaining and the plot gripping enough that I had no trouble in plowing through in a few hours (a good thing, given my time frame for reading and reviewing this!).  And the contemplation of the nature of the human and divine is not entirely out of place in either a murder mystery or a book set at Christmas, and this is both.  It's just that it feels a bit out of place in humor, which this book also is.