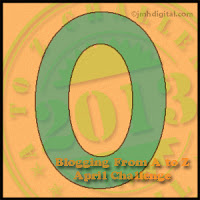 I waffled a lot about this post, because I couldn't come up with an "O" book I wanted to review.  I finally decided to take a book that was already old when I read it as a kid, and look at it with a modern, critical (adult) eye to see how it held up.  So I reread Louise May Alcott's An Old-Fashioned Girl.  First, a quick synopsis:

Polly Mason is the "old-fashioned girl" of the title, and the story narrates her relationship with her wealthy, and urban, friends the Shaws.  The story is divided into two parts, the first taking place when Polly and Fanny Shaw are about 14, and the second six years later when a now-adult Polly moves to the city to pursue a career as a music teacher.  The first portion was serialized in 1869, then expanded with the second portion and published as a book in 1870.

Now for some things I noticed.  Right off I was struck by the narrative voice.  Ms. Alcott is definitely present, not only occasionally addressing the reader directly, but also as a moral arbiter.  I am fairly certain this is the result of both common practice at the time and her desire, perhaps especially in this book (but on reflection probably in all her books), to model a world and set of behaviors she wishes were true. 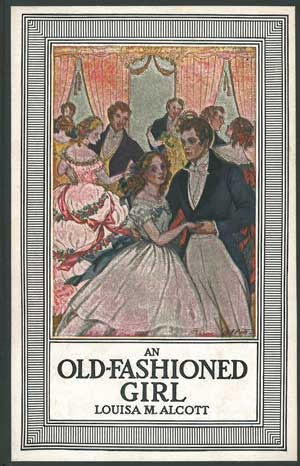 And that voice, which is far too often preachy, leads us to the other thing I noticed right off, which is Alcott's conviction that the country or the village is superior in pretty much every way to the city.  Having read her biography, I find this interesting, because Alcott herself was clearly ambivalent.  Her father was 100% clear: healthy bodies and healthy minds were made through outdoor work and play far from the city.  Louisa seems to have tried very hard to go with that, but spent much of her life moving to and from the city, where she in fact found better inspiration for her writing.

To return to the Old Fashioned-Girl.  As I watch the story develop from the arrival of Polly Milton (a name I think not at all chosen at random) in the city, awed and prepared to admire all she sees, through her disillusionment and struggle to find a place for herself there, I think that modern children (okay, girls) will both enjoy Polly and find her too good.  The old-fashioned values will seem as strange and absurd in many ways as do the values of the fashionable girls (and I wonder if a child will see, as I do, the universality of the the absurdity of fashion!).  Thus the first half of the book.

The second half takes on, for me, a very different tone and purpose.  When Polly returns to the city as a working girl, she lands smack in the middle of one of Alcott's pet topics, class (for want of a better word).  While the young reader will see this section as part coming-of-age and part love story, I see it as an exploration of class, work, and the place of women in a society that Alcott found unacceptably repressive, not to mention grossly unfair.  In that, I think that the second half is a much more interesting book than the first, which reads much more as a sermon.

As a side note: I don't think any of Alcott's books fails to include the death of a loved parent, sibling or other important person.  She was not merely unafraid of tackling a subject that I think was more in-your-face in those days, when far more children died and far more lost parents, but I think determined to help make it less frightening and devastating.  Her books advocate for a fairly orthodox Christian belief in a deity and and afterlife, despite the rather less orthodox ideas her father explored.  I've never been sure if Alcott was a true believer or merely knew what had to be said to sell, but she does at times adopt the standard line and religious tone, which grates a bit on my modern agnostic sensibilities.

Finally, here's one bit that I can totally identify with:
. . . she had nothing to do but lounge and gossip, read novels, parade the streets, and dress; and before a week was gone, she was as heartily sick of all this, as a healthy person would be who attempted to live on confectionery.  (p. 35)
Kind of how I feel about many people's idea of vacation, lying on beaches or sitting around on cruise ships or the like.  I go nuts if I can't get exercise!  Alcott clearly was right about one thing, given what we know now about the value of exercise, for people of all ages and genders.

So do I think that Alcott's book stands up to the passage of time?  Yes, and no.  I think many modern children will find the language a little challenging (not that that's all bad!), and many will also find the tone preachy, though it's less clear to me that that stops children--the Berenstain Bears and Mrs. Piggle-Wiggle both have great circ at the library, and to me they are both preachy as all-get-out.