Camp NaNo and the A to Z Challenge

Yup, another post about writing, and deciding how best to keep myself motivated. And it's not even time for the Insecure Writers' Support Group!

In April, the organization sponsors Camp NaNo, a less structured event in which you set your own goals, with the focus on getting the work done and making connections/finding motivation. I haven't done that before, in part because April is ALSO Blogging from A to Z month.

So here's the thing: I need a little more structure and some deadlines. So I want to sign up for Camp NaNo, though I'm debating which project to do. More on that in a minute. First, a word about the A to Z challenge.

I love A to Z. It's fun, it helps bring in some new readers to my blog, and the challenge is energizing. It's also a total distraction from writing my books. And I never really do it right, because I'm always so busy keeping up with my posts that I don't visit as many blogs as I'd like. So this year, I'm doing something different.

I'm not signing up for A to Z. I'm not posting every day. But I DO plan to visit A to Z blogs. And I want to make many, if not most, of my April posts, short bits pointing to blogs and posts I've found that I particularly like. I'll continue to do my flash fiction, because I like to, but I'm hoping that I can consolidate blog reading and blog writing time into one, get around to more people, and not encroach so much on my regular writing time.

That leads me to point #2: I'm signing up for Camp Nano, and I have to decide what the project will be. I see three possibilities:
1. Since I'll be finishing the 1st revision of Ninja Librarian #3 about the end of March, I could start in on the second revision and try to do that in a single month. This would have the advantage of building on some momentum, but...I feel a bit like the work ought to sit a bit between passes, and maybe even go out to someone else to read in here soon.
2. I could do the first revision/new ending for the Pismawallops PTA #3.*  It's at about the right point for that, and I have some ideas floating around about how to make it work better. It will probably take more than a month, though that's okay too.
3. I could draft, at last, Gorg the Troll's book. Naturally, I really want to do this one. But getting 3 books into early draft form seems like a bad plan.

I know I have a problem, in that a) I like writing rough drafts more than I like editing, and b) I can write a draft in a month. But it takes much longer to revise and rewrite and edit one into submission. I procrastinate a lot. And that is where I think Camp NaNo might help, making it fairly clear I ought to do one or the other of the revisions, even if Gorg would be more fun.

I have had another thought, so for option 4: create a short-story collection out of the best of my flash fiction. That actually might be a project that could be brought to something approaching completion in a month.


*Note: neither of these books I'm working on has a title that satisfies me. That will need to be one element of either revision! 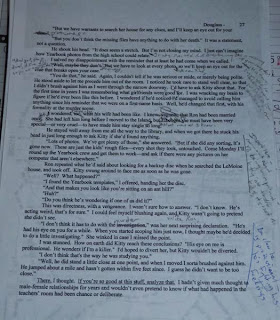