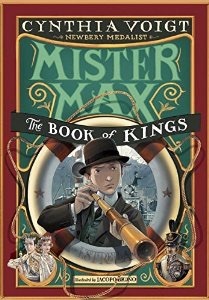 Publisher's Blurb:
Ever since Max’s parents were spirited away on a mysterious ship, he has longed to find them.

He’s solved case after case for other people in his business as “solutioneer.” And he’s puzzled out the coded messages sent by his father. He doesn’t know exactly what’s happened, but he knows his parents are in danger—and it’s up to Max to save them.

Max and his friends (and a few old foes) don disguises and set sail on a rescue mission. It will take all of Max’s cleverness and daring to outmaneuver the villains that lie in wait: power-hungry aristocrats, snake-handling assassins, and bombardier pastry chefs.

And behind the scenes, a master solutioneer is pulling all the strings.... Has Max finally met his match?

My Review:
As you can see, I kept to my word and not only read Book 3 on paper, but got there quickly. I've now read books from this series as audio, ebook, and hardback...and I have to say that the paper was the most satisfying. That's in large part because of the illustrations, which you miss entirely in an audio book, and which don't show as well on my Nook as on paper (audio has some other limitations, having to do with my need to see names written in order to keep them sorted out well; I like audio books but sometimes they work better than others for me).

This book was a tricky one for the author, as Max has to step back a bit and let some of the adults in his life take leading roles. He's over his head and he knows it, and is just finding out how much goes on that he doesn't know about. I think the shift is handled well.

Max is often frustrated by the restrictions his assumed role--secretary to the ambassador--puts on him, and it's carried out just enough for the reader to feel the frustration without getting bored. Then when things start to happen, Max has new issues to face, including his youth--and finally, the conflict between a boy who's been made independent and his father, who pushed him to do so but still wants to be in charge. There are some interesting parental dynamics there.

Overall, I thought the author did a great job of tying up the story, even giving us a sense of how things will work for Max beyond the end of the immediate crisis. The illustrations are intricate line-drawings, and are the icing on the cake. Get the paper book and immerse yourself.

Recommendation:
I highly recommend this series for anyone over about age 10 who likes adventure, problem-solving, and a bit of theatricality. Not surprisingly (she is, after all, a Newbery medalist), Voigt is an accomplished writer who weaves a compelling story with few stumbles. I'm very glad I did my own stumbling--into the series while browsing for something to listen to.

Full Disclosure: I checked The Book of Kings out of my library, and received nothing from the writer or publisher in exchange for my honest review.  The opinions expressed are my own and those of no one else.  I am disclosing this in accordance with the Federal Trade Commission's 16 CFR, Part 255: "Guides Concerning the Use of Endorsements and Testimonials in Advertising."