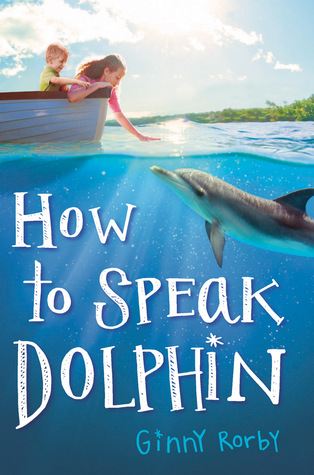 Summary:
It's been 2 years since Lily's mother died, and though she loves her little brother Adam, his severe autism has made him the focus of all their lives. Lily is frustrated because her step-dad doesn't seem willing to deal with Adam's problems, and she doesn't have any friends. That's a lot for a 12-year-old to cope with. But when Lily makes a friend at last, and Adam seems to respond well to dolphin therapy, it looks like things are getting better. But however much Adam loves Nori, Lily is beginning to see that a dolphin should be wild, not kept in a tank.


My Review:
How to Speak Dolphin is a well-written book that deals honestly with autism. In some ways, it seems a bit piled-on to have all of Lily's other problems, but the author handles it well. For example, my initial reaction to Lily's new friend being blind was that it seemed a bit gratuitous, but Rorby makes sense of it. It takes someone special to understand and cope with Adam, as Lily's classmates seem unable to do, and so to be a friend to Lily (who I think has been forced by circumstances to mature faster than average, as has Zoe due to her blindness. Realistically, Lily resents Adam, or the demands and constraints his autism puts on her, but she wants more than anything for him to get the help he needs to learn to communicate--and she's willing to give up a lot to help him.

I also wondered at first if the author was tackling too much with Lily's other issues: having lost her mother, trying to work out how they are a family with her stepfather, and the whole question of animal rights. But, again, on reflection, it works. If the only issue in her life were Adam, the book would end up being just a book about dealing with autism (not bad, but less interesting), rather than a book about a girl dealing with a whole lot of difficult problems caused in part by growing up.

Recommendation:
This isn't the best book I've read this year, but it is a good, engaging read for kids from about 9 up. It would be of particular interest to those who wonder about (or are dealing with someone who has) autism, but there is plenty in there to interest kids for other reasons (especially animal lovers!).

Full Disclosure: I checked How to Speak Dolphin out of my library, and received nothing from the writer or publisher in exchange for my honest review.  The opinions expressed are my own and those of no one else.  I am disclosing this in accordance with the Federal Trade Commission's 16 CFR, Part 255: "Guides Concerning the Use of Endorsements and Testimonials in Advertising."
Posted by Rebecca M. Douglass at 12:00 AM