I am astounded to discover that I have not reviewed any of Charlotte MacLeod's mysteries. Since I've been re-reading those I can find as ebooks, I thought this week I'd discuss one of her series. So, for those who haven't had the pleasure...meet Sarah Kelling and Max Bittersohn.

The first in the series (and I think the second book she published?) is The Family Vault, published in 1979 by DoubleDay).

(I wanted to use the cover under which I first encountered the book, but couldn't find a decent image of it).

This was followed by The Withdrawing Room in 1980. This cover is from the original paperbacks, which followed the hardcovers in close order. The covers were pretty macabre, for stories that really aren't! 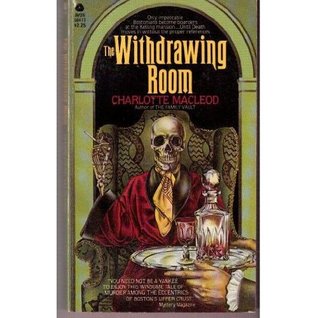 Followed by The Palace Guard, and so on. Ms. MacLeod was still writing the series when she died in 2005.

So why these books? Well, for one thing, they were my gateway drug to murder mysteries. Light, fun, and easy to read, they nonetheless have fascinating characters and good plots. Okay, the plots are worthy of Gilbert & Sullivan (of whom MacLeod was clearly a fan), and the author had a terrific tendency to word play and the use of uncommon vocabulary. That, combined with characters who might have come right out of Dickens (well, their names might, anyway. MacLeod never shied from giving a character an appropriate name, or at least a suggestive one--consider Bradley Rovedock from The Bilbao Looking Glass, a man with a tendency to go where he will, in more ways than one), tickled my fancy, and I read on.

With The Family Vault MacLeod created the Kelling clan of Boston, a family from the old Boston "codfish aristocracy" (where keeping up appearances is vital, but not as vital as getting all the possible good out of Great-Uncle Nathan's old morning-coat. These people will dress to the hilt, but it may well be in the clothes they have inherited for three generations. Ditto their cars. New England thrift meets aristocratic tastes). Sarah at first seems just a minor player in this family, but over the course of even the first book, and definitely the series, proves to be more of an iconoclast. When she converts her Beacon Hill Brownstone to a high-class boarding house, then marries Max Bittersohn and joins him in his detective pursuits, her relatives have no idea what to make of her.

It is that family connection that keeps the books Gilbertsonian, however. Sarah and Max are constantly being called on to solve the odd problems that develop in the clan, not to mention the dead bodies that keep turning up. Most of the situations are just slightly absurd.

Each book in the series stands on its own, but in my opinion the experience is enhanced when you read them in order. Sadly, MacLeod's books are largely out of print, though many libraries still have them (and they can often be found in used bookstores). If you like your murder with a touch of the absurd, it's worth tracking them down and reading them.

MacLeod's other series is the Peter Shandy mysteries, starting with Rest You Merry. She also published, under the name Alisa Craig, the "Grub-and-Stakers" series, and books featuring Canadian Mountie Madoc Rhys, as well as a few stand-alone novels.

Full Disclosure: Over the years I have borrowed, bought, and stolen (from my Mom) these books. The one thing I have never done is received one, or anything else, as a gift from  the writer or publisher.  The opinions expressed herein are my own and those of no one else.  I am disclosing this in accordance with the Federal Trade Commission's 16 CFR, Part 255: "Guides Concerning the Use of Endorsements and Testimonials in Advertising."
Posted by Rebecca M. Douglass at 12:00 AM