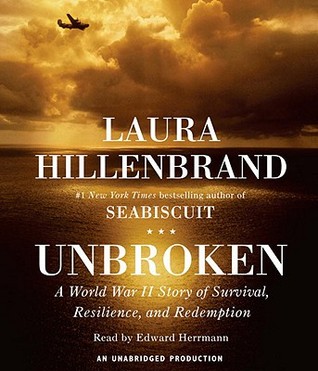 Publisher's Summary:
In boyhood, Louis Zamperini was an incorrigible delinquent. As a teenager, he channeled his defiance into running, discovering a prodigious talent that had carried him to the Berlin Olympics. But when World War II began, the athlete became an airman, embarking on a journey that led to a doomed flight on a May afternoon in 1943. When his Army Air Forces bomber crashed into the Pacific Ocean, against all odds, Zamperini survived, adrift on a foundering life raft. Ahead of Zamperini lay thousands of miles of open ocean, leaping sharks, thirst and starvation, enemy aircraft, and, beyond, a trial even greater. Driven to the limits of endurance, Zamperini would answer desperation with ingenuity; suffering with hope, resolve, and humor; brutality with rebellion. His fate, whether triumph or tragedy, would be suspended on the fraying wire of his will.
My Review:
What can one say about a story like this? The story is incredible, and Hillenbrand is a master storyteller who spins it out just about right. I appreciated that she included the stories of many of those around Zamperini--he was, after all, not the only one to endure things of this sort, and, in fact, the pilot who was the only other survivor of the crash and the time at sea had just as much of a story. The author even touches on the basic unfairness of who got the attention at the time and afterwards; Zamperini got the limelight because he was a runner of unprecedented talent.

At times, the story does feel a little too "wow"--a little too much emphasis on the amazing struggles, the miraculous salvations, and a tone of drama that the story doesn't really need, given how dramatic it is on its own. This bothered me more in the early part of the book, which focused on Zamperini's boyhood and his prodigious feats as a runner. By the time the airmen are dumped into the waters of the Pacific, no drama needs to be added to the story.

Probably the thing about the story that bothered me the most was something the author can't very well be blamed for: Zamperini was saved from PTSD by religion, a miracle I have some trouble crediting. But that is his story, and she told it well, even convincingly. As for the writing--it is solid, pulling the reader (listener) into the story and into the lives of the men she follows into the Pacific. I listened to this to the exclusion of getting other work done, because I had to hear it all, horrific though much of it was.

The reading is also excellent, and the narrator succeeds in keeping the story clear and straight in the listener's mind, with just about the right balance between drama and the calm that reminds us this is non-fiction.

Recommendation:
No surprise, given the book's best-seller status and the popular movie, but this has appeal for a wide audience. It's great for those who are fascinated by WWII, for those who like inspirational stories, and for those who just like a good hero. It's not flawless, but it will still knock your socks off.

Full Disclosure: I borrowed an electronic copy of Unbroken from my library, and received nothing from the author or the publisher in exchange for my honest review. The opinions expressed are my own and those of no one else. I am disclosing this in accordance with the Federal Trade Commission's 16 CFR, Part 255: "Guides Concerning the Use of Endorsements and Testimonials in Advertising."