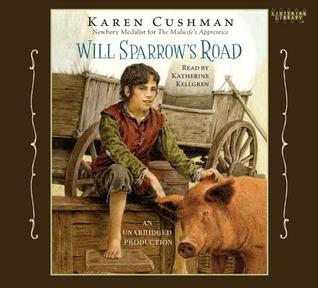 Summary:
Set in Elizabethan England, the book chronicles the travels of Will Sparrow, nearing 13 years old, when he runs away from the tavern keeper to whom his father sold him (he is motivated, as the tavern keeper has threatened to sell him to a chimney sweep--more or less of a death sentence). Will is cynical and distrusting, but he is also hungry, which leads him eventually to join up with a traveling troupe of "oddities"--a dwarf, a cat-faced girl, and a lot of fakes. It takes him a while to learn what he needs to know about appearances and deception, but in the end his road takes him where he needs to go.


Review:
Karen Cushman is well known for her historical fiction, and while it often has a touch of humor, this I thought was not only her first to feature a male protagonist, but the first to really embrace its humor. At first I found it a little hard to get into; the narrative style seems to create a little distance from the reader (maybe in an effort to have a more Elizabethan sound?). Nor is Will a terribly likable kid, though he is understandable. "I care for no one but myself and nothing but my stomach," he declares as his motto, while boasting of his prowess as a liar and thief. I did warm to the character, and the story, as the book progressed, and he learned both compassion and humility.


There is no question that the book presents a vivid picture of the time and place. The fairs, the thieves and pickpockets and charlatans that abound--these are real and clearly painted. The author's historical note at the end is fascinating, too, and I see on looking at the Amazon page that at the back of the book there is a bibliography of works on the period (not included in the audio book).

The reader, Katherine Kellgren, does an excellent job of voicing the characters and presenting the accents. I think the narration added a great deal to the story.

Recommendation:
This isn't the best of Cushman's books, but it is an excellent historical novel and certainly captures the time and place well. Nothing about it is inappropriate for readers from about 9 up.

Full Disclosure: I checked Will Sparrow's Road out of my library, and received nothing from the author or publisher in exchange for my honest review. The opinions expressed are my own and those of no one else. I am disclosing this in accordance with the Federal Trade Commission's 16 CFR, Part 255: "Guides Concerning the Use of Endorsements and Testimonials in Advertising."