Middle Grade Audio Review: The War that Saved My Life 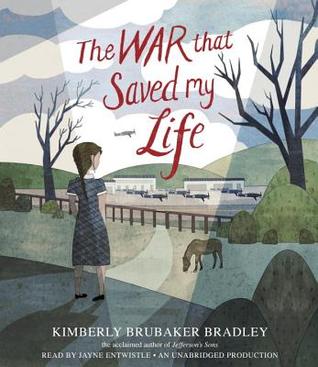 Publisher's Summary:
Nine-year-old Ada has never left her one-room apartment. Her mother is too humiliated by Ada’s twisted foot to let her outside. So when her little brother Jamie is shipped out of London to escape the war, Ada doesn’t waste a minute—she sneaks out to join him.

So begins a new adventure of Ada, and for Susan Smith, the woman who is forced to take the two kids in. As Ada teaches herself to ride a pony, learns to read, and watches for German spies, she begins to trust Susan—and Susan begins to love Ada and Jamie. But in the end, will their bond be enough to hold them together through wartime? Or will Ada and her brother fall back into the cruel hands of their mother?

My Review:
I found this a gripping story, complete with the sort of ill-treatment of children that makes me want to go strangle someone. Ada & Jamie's mother is almost unbelievably cruel; her behavior is made convincing only by the author  showing us that she is not alone in her strange ideas about physical differences as marks of the devil, signs of sin, or just plain curses. I'm not sure that the mother needed to be quite so over-the-top, but it certainly leaves the reader with less ambivalence about who you want to have continue as the children's guardian! The war in question is, of course, WWII, setting the book well before modern education reached the working classes.

With Ada as the narrator of her own story, we get insights into how foreign a world a small country town is to a pair of inner-city kids. Ada has it worst, because until she runs off with Jamie, she has never been outside her apartment. So she doesn't know many things that he does, and neither of them has any experience of things as commonplace as daily baths and tablecloths. She has many an internal struggle when she has to ask what things are or what words mean--Ada doesn't like being in the dark.

I think the real thing that saves her life and helps her to learn to be a real human being, though, is the pony. Riding Susan Smith's pony allows Ada, for the first time in her life, to move about without pain. And that opens the world to her, however cautious she may be about accepting that world. In the beginning, Ada sees everyone as a potential enemy or threat; as she herself becomes more comfortable and confident that she will not be abused by Susan, she also begins to see her new neighbors as humans--as they see her.

Jayne Entwistle is an excellent narrator (she does the Flavia du Luce novels of Alan Bradley, which I adore), and brings the characters to life, voicing each clearly and distinctly.

Recommendation:
Suitable for middle grade readers, probably 3rd grade and up (from age 8 or 9). The writing is accessible, though there will be things that are strange, especially to American children. The lessons the book teaches about accepting difference--driven home (perhaps unnecessarily) by Jamie's struggles with a teacher who sees his left-handedness as a curse and tries to beat it out of him--are valuable to all children. The other lesson in this book is that of persistence and endurance, because Ada manages to escape only because she is extremely strong-willed and determined from the start.

Full Disclosure: I checked The War That Saved My Life out of my library, and received nothign from the author or publisher in exchange for this review. The opinions expressed are my own and those of no one else. I am disclosing this in accordance with the Federal Trade Commission's 16 CFR, Part 255: "Guides Concerning the Use of Endorsements and Testimonials in Advertising."
Posted by Rebecca M. Douglass at 12:00 AM