MG Classics: The Door in the Wall

Given my penchant for reading and re-reading books from my childhood and before, I have decided that I will label books in that category (and the reviews) as "Middle Grade Classics."  I'm rather arbitrarily putting in that category anything written before about 1970 (I could argue that the publication of The Outsiders in 1967 marked a significant change in children's lit, but that's a discussion for another time.  No doubt I'll have it).  The feature will run randomly (whenever I happen to have read a middle grade classic) and will just indicate in the post title that the book is old, dating back at least to my childhood (quiet about what that suggests, you in the back!). 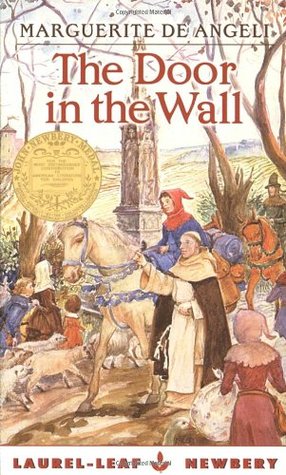 Summary:
Set in Medieval England, this is the story of 10-year-old Robin, son of Sir John de Bureford, a knight in the service of the king.  Robin's parents have gone to serve the king and queen, and Robin is meant to go to learn to be a page, squire and knight (to be fostered--a common practice among the nobility in those times).  But plague strikes London, and when Robin becomes sick, even though it is not plague (my interpretation is polio), he finds himself left alone as servants flee or die.  Left unable to walk, he certainly can't go to learn to be a knight.  He is rescued by Brother Luke, who takes him to the monastery, nurses him, and begins to teach him.  Robin gradually regains strength, and eventually is able to go to the family friend who was to foster him.  There, he finds that he can do something heroic, even if he cannot walk well, and he learns the meaning of Luke's claim that "Thou has only to follow the wall far enough and there will be a door in it."

Review:
This book is definitely a product of its time.  By today's standards of writing, the story is "told" rather than shown, and the adventures feel calm and distant, even when Robin is undergoing real and present danger.  The writing style mimics something of the "high romance" tone (a 19th-century idea of what medieval writing would sound like; presumably this was developed by people who never read Chaucer), which I find kind of fun but would probably feel alien and static to modern children.

Oddly, despite the fact that so much happens in this book, and even listening to a dramatized version with music added (a nice touch, and the Listening Library audio is really well done), it feels very calm and uneventful.  Yet a number of things happen.  First, in the manner of children's books of the era, Robin goes from being focused on his misery to thinking about what he can do, rather than what he can't.  I am not sure he ever gets beyond thinking of himself, even when he saves the castle--he is thinking as much of how a knight's son ought to act and about making his father proud as he is about saving others--but he does learn to find his own place in the world.  And do any of us really stop thinking about ourselves first?

While the story is clearly dated, I think it still has something to offer, especially to those who don't want edge-of-your-seat suspense the whole way.  This is an adventure story you can read without fear, and a fairly good view into the medieval world, as well as a somewhat transparent lesson about making the best of what you have.

Full Disclosure: I borrowed  The Door in the Wall from my public library, and received nothing from the writer or publisher in exchange for my honest review.  The opinions expressed are my own and those of no one else.  I am disclosing this in accordance with the Federal Trade Commission's 16 CFR, Part 255: "Guides Concerning the Use of Endorsements and Testimonials in Advertising."
Posted by Rebecca M. Douglass at 4:00 AM