This weeks' Wendig Challenge was a "must contain" challenge, with two lists of story elements from which the random number generator gave me two: an escaped prisoner and a faithful hound.  I chose to interpret that a bit loosely, of course.  As a bonus, it happened in Skunk Corners.


I never liked being shut in a schoolroom all day.  Way I saw it, whoever thought of locking kids up most of the daylight hours had a mean streak a mile wide and a mile deep.  Early on, I took to dodging school as much as I could.

I’d start out toward the school in the morning—Ma was a stickler for that—then whistle up old Stinkpot and go off wherever.  Everyone called my dog Stinkpot because he liked smelly stuff way too much.  Ma’d make me wash him, and then he’d go and tangle with a skunk.  When that wore off, he’d roll in something dead.  He was that sort of dog.  You’d never say he was a dog who had much use for school.

Some days, when I would go to school, ol Stinkpot, he’d come and sit outside, like he was scouting a way to bust me out.  See, he knew as well as me that school was a sort of jail, mean to keep us kids locked up on account of the grownups don’t want us to have fun.  Mebbe on account of grownups never seemed to have much fun, most days.

Anyhow, when Stinkpot’d come to school, I’d say I had to take him home, else the dogcatcher would haul him off and eat him.  I’d cry about it if I had to.  That was when we lived in Lupine, and the dogcatcher was an old fellow we boys figured ate dogs and cats.  So teacher’d let me go, and I’d give Stinkpot a biscuit for busting me out of the jailhouse.

#
Everything got different when we moved to Skunk Corners.  I never knew why Pa took us off up there.  It was awful close to the edge of everything, and made Lupine look pretty good.  Anyway, though, we moved up there and Ma was so busy, she told me to just go up to the school and register myself.

“Or whatever they do in this two-bit town,” I heard her mutter when she thought I’d gone out.  Now, that wasn’t right.  Two-Bit was two stops down the train line closer to Lupine.   Skunk Corners was beyond Two-Bit and just one stop short of Endoline.

Ma’s instructions looked to me like my perfect chance.  No one around there knew I was even there, let alone that I was supposed to be in school.  I was twelve years old, and could read and figure, which seemed good enough to me.  How much learning did a boy need in those mountains, was how I argued it.  And Pa kept moving us farther back into the hills, so it looked to me like I’d had plenty of school for where we were heading.

Of course, I didn't make that argument to Ma and Pa.  Ma’d say to get my backside to the school if I didn’t want her to tan my hide.  And Pa would say that if I didn’t want an education I could start working on the farm for real.  I already did plenty of work, feeding the animals and grubbing out stumps.  So I just started up the trail to town, meek as could be.

Once out of sight of the cabin, I slung my books under a bush and whistled.  Stinkpot came trotting up, smelling more like skunk than ever.  Figured, now we lived in Skunk Corners.

We went on that way for a week.  I left home every morning, and wandered off wherever we chose to go.  Stinkpot could always find his way home, so I didn’t worry none about getting lost.
But come Saturday, I wanted to see the town, such as it was.  We’d got off the train and gone right through to the farm, no time to explore nothing.  Ma’d been careful to point out the schoolhouse, but that wasn’t what I wanted to see.  I made a note of it all the same, to know what to avoid.

I’d stayed away all week so no one would send me to the school.  But Saturday would be safe, surely, so we started off early.  Ma wanted some flour and cornmeal from whatever they had for a store, so I even had an excuse.  I wasn’t in any hurry to do the shopping, though.  I just poked along the dusty street, checking things out.  I still avoided that school, but took a good look in at Two-Timin’ Tess’s Tavern.

All on a sudden, someone in dungarees, a big flannel shirt, and a pair of moccasins blocked my path.
“You’re new in town.”  I was surprised to hear a girl’s voice coming from the mass of denim and flannel.  I risked a look, and I guessed she was a girl, though her hair was cropped short and her hands were in her pockets, just the way mine were.

She shook her head.  “I’m just Big Al.”  She studied me some more.  “On second thoughts, that’ll be ‘Teacher’ to you.  I’ll see you in class Monday.” It wasn’t a question.  Then she gave Stinkpot a chunk of jerky, petted his big silky ears, and was gone into the big brick building that claimed it was a library.

I shrugged and finished my exploring, and bought Ma’s supplies.  By the time I was home, I’d forgotten all about Big Al.

#
Come Monday, I did what I always did.  I headed for the creek, Stinkpot at my heels, and went to fishing.  It was a perfect day for it, and I had a great time in the creek, even if I didn’t catch no fish.
Along about mid-morning, Stinkpot disappeared, but I didn’t pay that no mind.  Stink, he’s always haring off after something or other, and he always comes back when he’s ready, or when he’s hungry.

Just when I was starting to think about eating the bread and butter Ma’d put up for my lunch, up bounded Stinkpot.  I took it for granted he’d come back for lunch, until a noise made me look beyond at the bushes.  There stood that Big Al person.  I looked from her to Stink and back, and she nodded.

“Yup.  He brought me, just like I asked him to.  And now he’s going home, and you are coming to school.”  Then she stood there with her arms crossed, and glared at me until I packed up my fishing stuff and came up to her.  I stood there waiting for the roof to come in on me, because she was big, and she looked mean.

But Big Al—Teacher—just laughed and petted Stinkpot.  She gave him another bit of jerky.  “Good boy.  You run along home now.”

And that lousy traitor dog panted a smile, wagged his tail, and trotted off.  And Teacher took me by the arm and hauled me back to prison.

Which is how I came to learn there’s more to school than ABC and more to ‘Rithmatic than two plus two.  I’m still not sure I like it, but Stinkpot won’t come bust me out anymore, so I guess I’ll have to stick around and learn something. 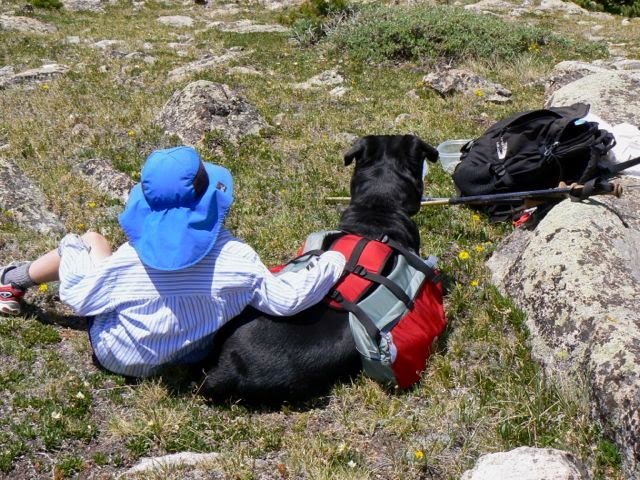