Book Review: Alone on the Ice 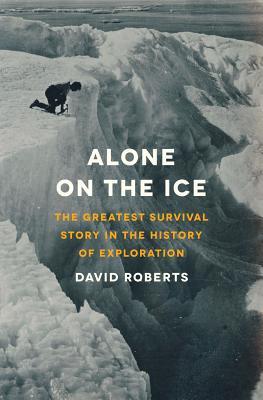 Title: Alone on the Ice: The Greatest Survival Story in the History of Exploration
Author: David Roberts
Publication info: 2013 WW Norton.  Blackstone Audio 2013  (Interesting note: this book was published as both ebook and audio book several weeks before the hardback, if pub dates on Goodreads are to be believed).
Source:  Library audio e-book

Summary:
This is the story of the 1912-13 (1914 by the time they finished, in fact) Australasian Antarctic Expedition, which in fact took place at the same time as Amundsen and Scott were racing for the South Pole.   Though the ad copy and title focus on the amazing journey made by expedition leader Douglas Mawson over several hundred miles alone after his two companions die, it is in fact the story of the entire expedition, and, by extension, the "golden years" of Antarctic exploration.

Review:
First, to get my kvetches out of the way: this book takes on too much.  There is too much backstory (as we fiction types say), and far too much of the book goes into too much detail about other expeditions.  Some of this is necessary--showing how Mawson got where he did, as leader of the AAE, through other expeditions.  The narrative arc (again, thinking like a fiction writer) runs too far on both sides of the advertised purpose of the book.  The book is much stronger when seen as the story of the AAE, rather than being judged as an adventure tale about that one survival situation.  I'm not downplaying that story--it truly is a mind-boggling feat of endurance and strength of body and will, probably never matched.  But the whole expedition is the focus of the book and is a tale worth the telling as well.

I found the initial chapters slow going as we waded through biographies and accounts of other expeditions.  This was made the harder because I was listening to the book, and that made it tough to keep track of who was who and why (I also missed some good pictures that way--original photos by Frank Hurley, expedition photographer, who was also the photographer on the famous Shackleton expedition--in itself an argument for hunting up the hardback).

But I'm a sucker for this kind of thing--both the survival story and the accounts of explorations such as the AAE.  So I hung on, and the book became gripping.  I did feel that Roberts was at times working too hard to make us recognize Mawson's greatness (due to his historic neglect, being overshadowed by Scott and Shackleton who were British rather than Aussie, and had better publicists), but overall it is a well-written account of an expedition of which I had heard very little, though both in terms of personal adventures and scientific value, it may have been one of the best from those early years (Mawson was a scientist first and foremost, unlike most such explorers.  It didn't always make him popular with his men, but it did lead to some excellent data, which he spent his life working to publish and make useful to science).

Recommendation:  As the saying goes (Yogi Berra?  Why not?), if this is the sort of thing you like, you'll like this.  I recommend it for people like me who like tales of exploration, especially from the years before modern equipment and communications took some of the edge off.


#
Full Disclosure: I borrowed Alone on the Ice from my (digital)  library, and received nothing from the writer or publisher in exchange for my honest review.  The opinions expressed are my own and those of no one else.  I am disclosing this in accordance with the Federal Trade Commission's 16 CFR, Part 255: "Guides Concerning the Use of Endorsements and Testimonials in Advertising."
#####
And while we're on the subject of ice and freezing and all--don't forget to click through and enter the Death By Ice Cream giveaway!
Posted by Rebecca M. Douglass at 4:00 AM