YA Classic: A Tree Grows in Brooklyn 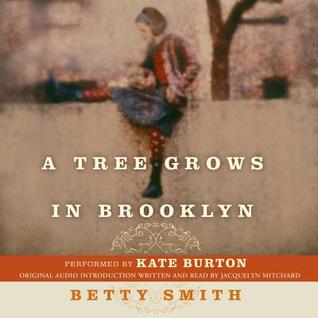 Goodreads Blurb:
The beloved American classic about a young girl's coming-of-age at the turn of the century, Betty Smith's A Tree Grows in Brooklyn is a poignant and moving tale filled with compassion and cruelty, laughter and heartache, crowded with life and people and incident. The story of young, sensitive, and idealistic Francie Nolan and her bittersweet formative years in the slums of Williamsburg has enchanted and inspired millions of readers for more than sixty years. By turns overwhelming, sublime, heartbreaking, and uplifting, the daily experiences of the unforgettable Nolans are raw with honesty and tenderly threaded with family connectedness -- in a work of literary art that brilliantly captures a unique time and place as well as incredibly rich moments of universal experience.

My Review:
At first I wondered if I even wanted to finish this book. The style is definitely dated, and the there was a sense of distance that put me off as much as the grim reality of Francie's world did. But I kept on, the story and the style grew on me, and pretty soon instead of wondering if I even cared about the main character, I couldn't stop listening to see how she would manage to escape the life she could have been doomed to.

A Tree Grows in Brooklyn is a fantastic coming-of-age story. As we watch Francie grow and mature, we feel her struggle with her love for her ne'er-do-well father and her resentment of the mother who holds the family together, but can't hide her preference for her son over her daughter. With her own growing responsibilities Francie gains a greater appreciation of what her mother has done. They never stop struggling with each other, but there is one thing that holds them together: the determination that the Nolan children will be educated. That is the guiding force of Francie's life, and she sacrifices from an early age to achieve her goal.

Usually when I read a book that has been protested or banned, I'm hard put to understand why. In this case, I do get it. The author pulls no punches when it comes to the grittier aspects of life in 1900s Brooklyn, and that includes a level of frankness about sex that must have been disturbing in 1943 when it was first published. In fact, though the act of sex is never described here, I found some of the discussions of it a bit hair-raising myself. I'm not in favor of any book-banning, and kids see worse on TV, but there was something about this book that felt more real than any movie, so readers should be forewarned.

My Recommendation:
A classic for a very good reason, and one to read if you never have. It is probably most suited for older teens and up. Some aspects of the book--including issues of racism and class prejudice as well as sexuality--may need discussing with young adults who read it.

I do classify this as historical fiction: it was written in the early 1940s, and set in the first 2 decades of the Twentieth Century.

FTC Disclosure: I checked A Tree Grows in Brooklyn out of my library, and received nothing from the writer or publisher for my honest review.  The opinions expressed are my own and those of no one else.  I am disclosing this in accordance with the Federal Trade Commission's 16 CFR, Part 255: "Guides Concerning the Use of Endorsements and Testimonials in Advertising."
Posted by Rebecca M. Douglass at 12:00 AM