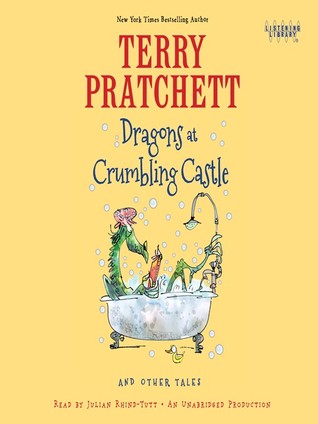 Publisher's Blurb:
Dragons have invaded Crumbling Castle, and all of King Arthur's knights are either on holiday or visiting their grannies. It's a disaster!

Luckily, there's a spare suit of armour and a very small boy called Ralph who's willing to fill it. Together with Fortnight the Friday knight and Fossfiddle the wizard, Ralph sets out to defeat the fearsome fire-breathers.

But there's a teeny weeny surprise in store...

My Review:
I wasn't quite sure if I was going to be disappointed, because these were among Pratchett's earliest published stories, and you know how that can go. I needn't have worried: they were great. Witty, insightful, well-written and also well-read, they were everything I love about Terry Pratchett. The title story is a delightful bit of nonsense...and so are the rest. The Carpet People make their first appearance in these stories, and I'll have to see what he did with them later, because they are wonderful, and their world is beautifully realized.

The stories, especially "The Speck" and some others show an early tendency to the political satire that became Pratchett's hallmark. In these stories it's mild, in part because they were written for a juvenile audience and in part (no doubt) because the writer was himself about 19 at the time. Adults will be entertained by the multiple levels of satire, but children will love the goofiness of many of the stories, so it's good for the family.

Julian Rhind-Tutt does a fantastic job of reading the stories, and his timing as well as his lovely British accent add a lot. I am tempted to say that everyone should listen to the audio version, but then I saw that the print version is illustrated, and if the illustrations are anything like the cover picture, I want to see them, too. So I guess one has to get both.

My Recommendation:
It occurs to me that this book would be a great family read-aloud, or use the audio book for the long drive to Grandma's for Christmas. You won't be sorry.

FTC Disclosure: I checked Dragons at Crumbling Castle and Other Tales out of my (digital) library, and received nothing from the writer or publisher for my honest review.  The opinions expressed are my own and those of no one else.  I am disclosing this in accordance with the Federal Trade Commission's 16 CFR, Part 255: "Guides Concerning the Use of Endorsements and Testimonials in Advertising."

And if goofiness is something you enjoy, be sure to check out our Ninja Librarian series, including the latest, now available from Amazon and Smashwords, as well as other on-line bookstores. Or order signed copies direct from the author!