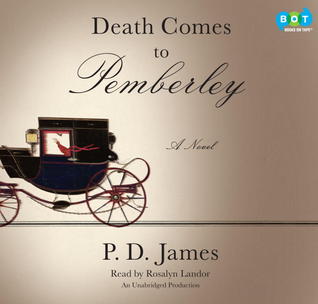 Publisher's Summary:
It is 1803, six years since Elizabeth and Darcy embarked on their life together at Pemberley, Darcy’s magnificent estate. Their peaceful, orderly world seems almost unassailable. Elizabeth has found her footing as the chatelaine of the great house. They have two fine sons, Fitzwilliam and Charles. Elizabeth’s sister Jane and her husband, Bingley, live nearby; her father visits often; there is optimistic talk about the prospects of marriage for Darcy’s sister Georgiana. And preparations are under way for their much-anticipated annual autumn ball.

Then, on the eve of the ball, the patrician idyll is shattered. A coach careens up the drive carrying Lydia, Elizabeth’s disgraced sister, who with her husband, the very dubious Wickham, has been banned from Pemberley. She stumbles out of the carriage, hysterical, shrieking that Wickham has been murdered. With shocking suddenness, Pemberley is plunged into a frightening mystery.

Inspired by a lifelong passion for Austen, P.D. James masterfully re-creates the world of Pride and Prejudice, electrifying it with the excitement and suspense of a brilliantly crafted crime story, as only she can write it.

My Review:
I suppose this is fan fiction, only that sounds absurd when the writer is one of as much stature as P. D. James! Still, the book seems to stand in an in-between space between James' own work and an effort to sound like Jane Austen. And the book sits somewhere between a mystery and an Austen novel. There is a murder, but Darcy and Elizabeth are not sleuths, even amateur ones. The mystery unfolds on its own, in fact, without any sleuth at all, and in the end I felt...cheated.

That's not to say I didn't enjoy the book, because I did. I love Jane Austen, and it was fun to dive back into her world. It was also a pleasure, if a somewhat guilty one, to see how that match between Darcy and Elizabeth works out. The prose is a good match though at some points it feels like it's working too hard to match, and the narrator is excellent. It's just that in the end, it isn't Jane Austen. And it didn't feel like it was PD James, either, because the book doesn't really do what James did best, either: it didn't present a complex and satisfying mystery.

Recommendation:
It's a bit of a tricky call. It's a pretty good story, so if you are a fan of either Austen or James, and open to having them both a bit shifted from their usual natures, it might be a go. But if you are like me, you might want to go on imagining your own future for Darcy & Elizabeth.


FTC Disclosure: I checked Death Comes to Pemberley out of my library, and received nothing from the writer or publisher for my honest review.  The opinions expressed are my own and those of no one else.  I am disclosing this in accordance with the Federal Trade Commission's 16 CFR, Part 255: "Guides Concerning the Use of Endorsements and Testimonials in Advertising."