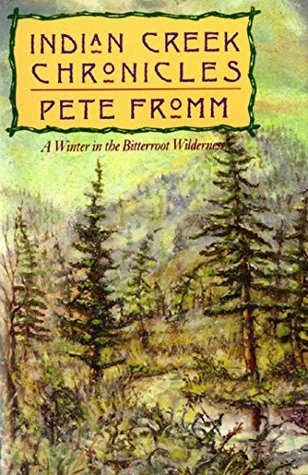 Publisher's Summary:
Winner of the Pacific Northwest Booksellers Association Book Award, Indian Creek Chronicles is Pete Fromm's account of seven winter months spent alone in a tent in Idaho guarding salmon eggs and coming face to face with the blunt realities of life as a contemporary mountain man. A gripping story of adventure and a modern-day Walden, this contemporary classic established Fromm as one of the West's premier voices.

My Review:
I wish I could recall who gave me the recommendation to read this one, because it was a real pleasure. Fromm's account of his winter alone (mostly) in the Bitterroot Mountains wraps up a whole lot in one package--everything from an environmental message to a coming-of-age tale to a young man's simple delight in pushing his limits.

Many young people come to a love of wilderness through a summer spent working in a park or at a camp. Pete Fromm got there by spending a winter snowed in along a creek in the mountains of northern Idaho. He dropped out of school to babysit a creek full of salmon eggs, not because he had any particular environmentalist leanings, but so he could "have a story." His sole knowledge of the wilderness at that point appears to have come from reading a lot of books about mountain men, and he takes the job out of a romantic desire to emulate them. It's a desire that directly contributes to his misery in the first months in his tent.

Fromm has to learn everything he needs to know on the fly (and much of what he needed to know about food, he would have done better to have learned before he went, as he was pretty much stuck with what he bought). Having gone with the intention of being a "mountain man" and making his way by hunting, he finds that he not only has to learn to hunt, but then has to learn to deal with the conflicting feelings he gets from acts of mountain-man derring-do that result--he realizes abruptly one day--in the death of an actual living thing. He manages to balance that for the creatures he eats, but his trap line doesn't last past his first kill.

I laughed at some of his ignorance going into the job, but I admired the young man who hung on, who learned from his mistakes and from anyone he could find to observe, and learned to love the wilderness. He struggled through that winter, with its isolation and privation, but I think that he was privileged to discover that he was, indeed, one of the people who are at home in the wilderness. (Plus, he learned to love books.)

My Recommendation:
This is a quick and easy read that is good for anyone who loves the wilderness--or thinks s/he might. Some events in the book may be a little disconcerting to our 21st-Century ideals of wilderness travel, but bearing in mind that it was 1977 and Pete was only 19, he actually did amazingly well at developing a wilderness ethic.


FTC Disclosure: I checked Indian Creek Chronicles out of my library, and received nothing from the writer or publisher for my honest review.  The opinions expressed are my own and those of no one else.  I am disclosing this in accordance with the Federal Trade Commission's 16 CFR, Part 255: "Guides Concerning the Use of Endorsements and Testimonials in Advertising."
Posted by Rebecca M. Douglass at 8:01 PM