Review/appreciation: Ivan Doig and The Last Bus to Wisdom 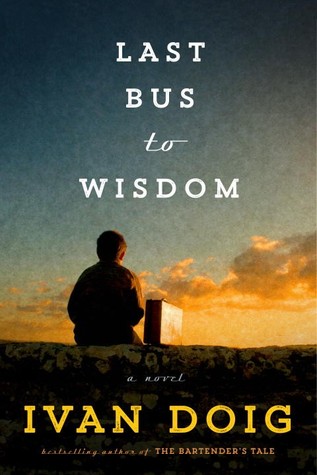 Summary:
In the summer of 1951, 11-year-old Donal Cameron lives with his grandmother on the Double-W ranch in Doig's favorite Two Medicine country. But when she needs to have an operation (for "female troubles" in the euphemism of the day), he is shipped off by Greyhound bus to the only relative they have--his great-aunt Kitty in Manitowoc, Wisconsin. The bus ride is an education in itself, but Kitty is something else again. Stingy, bossy, and mean to Donal and her husband ("Herman the German") alike, in the end she throws the boy out. That's when he and Herman team up, and head out so Herman can experience the Wild West.
Review:
It's pretty hard to do a real critical review of the last book of a favorite author. Ivan Doig died in April of this year, to my deep regret. It is clear, however, that unlike some cases where an author dies in the middle of working on a book and it's published as is, or finished up by someone else, Doig had in fact finished this book. The language is his usual brilliant and unique voice, and the story perhaps somewhat Gilbertian (that's as in Gilbert and Sullivan...), but with a stronger edge of harsh reality not far away.
If Donal and Herman set off for a frolic to pass the summer, there are some very real consequences to it all: Herman has left his wife, and that turns out to be more problematic than it would be for most. And if reality catches up to Donal, he'll be sent to foster care or an orphanage--not fates he wants to face. If this is a coming-of-age novel (as some of Doig's later novels seem to be--I'm thinking of The Whistling Season and The Bartender's Tale in addition to this one), Donal grows up hard and fast and at a pretty tender age.

If I felt at times a bit at sea when the story left Doig's Montana, the land he can call to life in front of your eyes with his well-chosen words, so did Donal. Wisconsin lacks the same vivid reality Montana has for the reader, which I read at first as a flaw, but I'm not so sure it is, on reflection. Wisconsin is less vivid and real for Donal, as well. Some people shouldn't be taken from the place of their roots. Herman, on the other hand, seems to have his roots in a place he's never before been. The West of the pulp Western writer has his imagination in thrall, but he does okay when he meets the reality, too.

Recommendation:
I would recommend this and any of Doig's work to anyone who loves a well-turned phrase and an evocative landscape.
Full Disclosure: I borrowed an electronic copy of Last Bus to Wisdom from my library, and received nothing from the author or the publisher in exchange for my honest review. The opinions expressed are my own and those of no one else. I am disclosing this in accordance with the Federal Trade Commission's 16 CFR, Part 255: "Guides Concerning the Use of Endorsements and Testimonials in Advertising."